Online: Out of Sight

In Imperial City Prison, defeat the Overfiend, Ibomez the Flesh Sculptor, the Gravelight Sentry, the Flesh Abomination, and Lord Warden Dusk without any group member being noticed by the Vigilant Watchers.

Out of Sight is awarded for avoiding all five Vigilant Watchers in the Imperial City Prison, then going on to defeat Lord Warden Dusk at the end of the dungeon. This achievement can be earned on both Normal and Veteran difficulty.

How to Get the Achievement[edit] 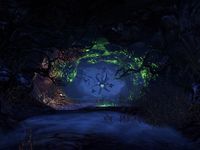 A Vigilant Watcher surveying a tunnel

Vigilant Watchers aren't like normal enemies. They're all eyes and no ears; that is to say, they will only notice you if you walk right in front of them. You could walk right up to them from behind and they won't notice you. Vigilant Watchers look imposing and have many small eyes all over their bodies, but you have nothing to fear as long as you're not within their direct line of sight! Only their largest eye is functional.

Vigilant Watchers have a large eye on the front of their body. A light emanates from that central eye, casting a green glow on the surfaces in front of them. This green glow indicates their aggro range, or the area you have to stand in so that they can see you.

Most groups will just plow through the Vigilant Watchers without caring whether or not they avoid the creatures, but most groups are usually just looking to defeat the bosses and get out of there.

So how do you avoid the Vigilant Watchers? The simple answer is to watch their movement patterns and hug the wall when necessary, but that doesn't tell you how each Watcher behaves. There are five Vigilant Watchers: one is in the fleshy sewer corridor leading up to Ibomez the Flesh Sculptor, three are in the open caverns beyond the cell block after the Flesh Sculptor fight, and the last Watcher is in the ruined Ayleid hallway leading up to the Gravelight Sentry's chamber.

First Watcher: Before the Flesh Sculptor[edit]

This Watcher is in the hallway leading into Ibomez the Flesh Sculptor's chamber. Wait at the bottom of the stairs leading into the meat tunnel for the Watcher to stop at the end of the hallway, closest to the stairs. Wait for him to turn his back to you. Once he turns around, it's safe to be in the meat hallway.

You can follow as close behind him as you like without sneaking. When the Watcher reaches the wall, he'll make a left turn into an alcove to stare at a wall. He will turn just enough to allow you to got in the hallway to make the right turn you need to enter Ibomez's room. As soon as he makes this left turn at the end of the hallway, hug the wall to the right and start sprinting past him.

Don't just stop at the end of the meat tunnel, you need to enter Ibomez's room before you can consider yourself completely safe. Leave no holds barred and don't leave anything to chance; the Watcher doesn't enter Ibomez's meat room, thus it is completely safe from the creature. The next step is to defeat the Flesh Sculptor, then travel through the cell block beyond his meat cave. The cell at the end of the hall (which is opened by the lever beyond the room full of neutral Inmates) leads into a large, open cave system corrupted by Coldharbour's pervasive influence.

Second Watcher: After the Flesh Sculptor[edit] 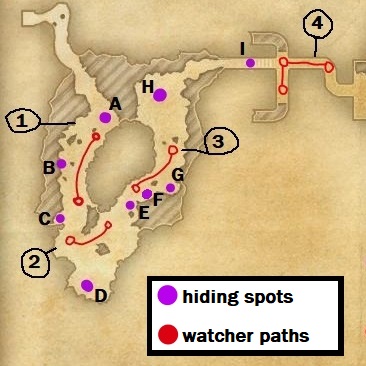 The second watcher is located in the caves beyond Ibomez the Flesh Sculptor. You'll experience an add pull after the room full of inmates, where you'll pull a lever to open the gate to the next area. Past the cell block lies two Mindshriven bloodfiends, and beyond them lies an add pull featuring a Harvester. The Vigilant Watcher is on the ridge to the right of the add pull. The add pull is point A on the map provided.

To sneak past this Watcher, you need to wait until its back is to you, and it starts heading west. There's a bit of the wall hanging out on the right-hand side a little ways down the tunnel that you'll hide behind (point B on the map). Hide in the corner (point C) until the Watcher comes back east, and when he passes the corner, make a break for the western section of the tunnel.

Third Watcher: On the Western Side of the Caves[edit]

The Third Watcher is at the western end of the cave system. You may need to wait for this Watcher to turn its back to you and start heading south before you can run past it. Make sure you stay behind the black rock walls out of its green line of sight (point C). When the Watcher starts moving south, head for the add pull with the Flesh Atronach (point D) on the big, round western edge of the ridge, overlooking what looks to be Coldharbour.

Fourth Watcher: On the Southern Side of the Caves[edit]

You may need to hide behind a rock wall to avoid the fourth Watcher after defeating the aforementioned group of monsters (west of point E). There's a rock pillar in the middle of this Watcher's path, north of point F. When you look at it from the west, you'll notice the Watcher goes around the left-hand side of this rocky spire. This leaves quite a large gap for you to slip past him when he's heading west. Hide behind a rock wall near this pillar while he's staring towards the east, and when he starts coming towards you, go around the right-hand side of this rocky spire, from point F past point G.

Just to be safe, your group should take the add pull (point H) at the far southeastern end of the room all the way towards the wall, or at least as close to it as you can get. Kill the monsters, then move on to the fifth Watcher, which lies in the next hallway.

Fifth Watcher: Before the Gravelight Sentry[edit]

When you exit the caves, you'll find yourself in an Ayleid hallway. There's a stairwell leading further into the bowels of the city in this hallway, and it's the first and only staircase you'll have to cross to get to the Gravelight Sentry. At the bottom of these stairs lies the hallway where the Watcher is patrolling. Point I on the map marks the top of the staircase.

To avoid this Vigilant Watcher:

As soon as you make it past this fifth and final Watcher, you're home free! You can do whatever you want when you hear the Gravelight Sentry inform the Lord Warden of your approach—you are now safe from the Watchers. From this point on, there are no more Vigilant Watchers to impede your progress or stop you from getting this achievement.

But don't stop here! It is imperative that you complete the dungeon. The achievement is awarded after Lord Warden Dusk dies and the game registers the activity as complete. If you do not defeat Lord Warden Dusk, you don't get the achievement, so don't leave or disband the group after you reach the Gravelight Sentry.