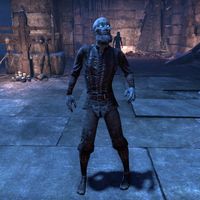 Inmates are Mindshriven found in the Imperial City Prison. Although not initially hostile, they can be attacked. They shouldn't be confused with Prisoners. They use the feral animation set when provoked, and they will all attack if you attack one of them.

The inmates summoned by Ibomez the Flesh Sculptor will be hostile, but can be killed with flesh grenades. If they are not killed, they will be transformed into Flesh Atronachs.