The UESPWiki – Your source for The Elder Scrolls since 1995
< Online: NPCs
Jump to: navigation, search 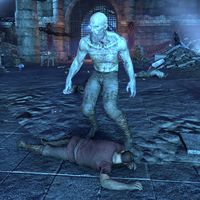 Mindshriven (or Mind-Shriven) are mortals who have had their psyche stolen by Daedric magic, turning them into mindless servants of Molag Bal. This process results in glowing veined skin and blue eyes. Members of Legion Zero were required to imbibe the Blood of Coldharbour and become mind-shriven as a test of loyalty.

There is one Achievement associated with these NPCs: