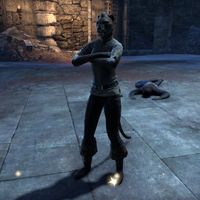 Narazda is a Khajiit, who, along with Adonatus Varian, helps you through Moon Hunter Keep.

Once Jailer Melitus is defeated, the following conversation will be heard between her and Adonatus:

Adonatus Varian: "I told you to escape with the others."
Narazda: "And Narazda told you, she has the right to face her captor as well."
Adonatus Varian: "Fine! If you want to die playing hero, it's on you."'

Narazda can then be questioned:

"Narazda did not stay in this Alkosh forsaken place to be ignored.
Listen well, walker. The garden that lies ahead is the only way forward, but dangers lurk within. Still, we must pass through if we ever hope to face Vykosa."
So you are going to help us defeat Vykosa?
"Of course! Though this one's role shall be strictly advisory. Narazda is not one for fighting.
Vykosa has taken the lives of far too many innocents. Her terrible reign must be brought to an end, yes? And so, this one helps."

How do you know so much about the keep?
"Narazda has been a prisoner for many days now. But a fool, she is not.
So she has listened. And what she has happened to hear may prove very useful to you and the handsome soldier's endeavors. If he is willing to see reason, that is."

Tell me about the garden.
"Most gardens have flowers and hedges, perhaps a nice pond or two.
Vykosa's tastes run a tad more morbid. She has planted stranglers and spriggans, beasts of root and malice. Into this garden many go, but very few escape."

Why would Vykosa make such a garden?
"It is a test, you see. To prove that you are worthy enough to be one of her pack. Survive long enough, and she will bless you with her bite.
But most … most die."

Anything in particular I should watch out for?
"Yes. A powerful lurcher they call the Hedge Maze Guardian.
Those who survived the garden simply avoided it. Unfortunately, it guards the only way further into the keep. If you wish to face Vykosa, it must be defeated."

When you speak to her before the Hedge Maze Guardian:

"Narazda said she would help, yes?
This one shall watch over you as you fight that creature. Heed her words, walker. They may be the only reason you survive."

During the fight with the Hedge Maze Guardian, she will shout out warnings for various fight mechanics:

If the spriggans have been up for a while:

"Don't allow those spriggans to keep healing the Guardian!"
"The spriggans are still out there! You must stop them!"
"You must defeat the remaining spriggans!"
"Don't ignore those spriggans, walker! They need to be killed!"

Root Stomp
"You must escape those roots! Before it's too late!"
"You'll be crushed by those roots! Quickly, get out!"
"Those roots will crush you! Try to slip free!"
"Don't become trapped in those roots!"

When the Guardian is defeated, Narazda and Adonatus will arrive in the area and have a conversation.

"Our soldier friend is not looking so good. Well, he is always looking good, of course. But still, Narazda worries that he may be ….
Best not to dwell. You must focus now on defeating Moon-Caller."
Who is Moon-Caller?
"You have defeated many werewolves now, yes? But none like Mylenne Moon-Caller.
She speaks, and the pack listens. Of course, this is mainly because she kills all who dare disobey her. Within this keep, only Vykosa holds more power."

Narazda: "We cannot continue like this. If you transform now, we'll all be at risk!"
Adonatus Varian: "You think I don't know that already, cat? Save your concern. I have a plan."
Adonatus Varian: "I just need some belladonna berries. They should be further within the keep."

"Narazda knows these symptoms, walker. Sometime soon, our soldier friend will be more rugged than handsome. And when he turns … he will turn on us.
But there is no time to handle this. We must make our way to Vykosa."
She is close?
"Not yet. The jekosiit will first have us face another within her pack. The Archivist.
We will find him within the library, among his tomes and spells. There you shall face not only tooth and claw, but magic as well. Or so this one has heard."
Seems odd for a pack of werewolves to have an archivist.
"When Vykosa took Moon Hunter, many of the Silver Dawn were captured and forced to turn. Such was the Archivist's fate.
But he deserves no pity. He has caused the suffering of many with his dark experiments."
I am curious, his experiments?
"Narazda …. The bodies she has seen. The screams she has heard.
He wishes to make the pack stronger, but so often he fails. This one … this one is sorry, walker, but she does not know more."

After Archivist Ernarde is defeated, Narazda and Adonatus will come into the room and have a conversation about the werewolf cure:

When speaking to Narazda then, she will answer:

"I do not wish to linger here long, walker. This room brings bad memories."
Why would you have bad memories about this room?
"The Archivist was not merely a bookkeeper. He performed all manner of dark experiments, always claiming he was going to make the pack stronger.
Vykosa paid no mind to the pain these experiments caused … the suffering."
It almost sounds like you were part of those experiments.
"Let us not speak of that now, yes? Our handsome soldier would not be pleased if he overheard such things."

When Vykosa is defeated, Narazda will rush in through the door:

Narazda: "We must leave! Adonatus has finally transformed!"
<Adonatus as a werewolf runs in then shifts back to human form.>
Adonatus Varian: "No. No, I…I can control it. For now at least."

If you speak to her before speaking to Adonatus during Moonlight Ascent she will say:

"You should speak to Adonatus, yes? There's no telling how long he can hold back the urge to transform."

After completing Moonlight Ascent the following conversation will occur between Adonatus and Narazda. If you didn't grab the ingredients for Adonatus's cure:

Narazda: "This curse … it does not always lead to misery. You can learn to control it."
Adonatus Varian: "Like you have? Yes, I know you're one of them. A werewolf."
Narazda: "But Narazda is not one of them. She was your ally, your friend. And she still can be."
Adonatus Varian: "I can't. I swore to protect the innocents of Tamriel, and if that means ending my own life … so be it."
Narazda: "Then … here. Take this. You at least deserve a swift end."

"He did not have to die. Narazda could have taught him to control it. We of the moons … we are not all like Vykosa and her ilk."

If you gathered all the ingredients to cure Adonatus:

She can be spoken to for the last time, where she can be asked about her experiences as a werewolf:

"Well, Narazda certainly didn't expect our handsome soldier to throw a parade in her honor, but … a thank you would have been nice.
Still, this one is used to such treatment by now. Not many are kind to us children of the moons."
So you are a werewolf.
"Forgive this one's secrecy. Not many are accepting of my kind.
But Narazda did not lie about being a prisoner. Like many, she was lured to Moon Hunter Keep by Vykosa's magic. For months, this one was forced to obey that jekosiit's commands."

But you were able to fight back?
"Yes. Narazda was among those the Archivist experimented on. The testing was supposed to strengthen her, to make her more … useful to the pack.
And in a way, it did. It made her strong enough to resist Vykosa's compulsion."

So Vykosa imprisoned you.
"The Archivist hoped to study what happened to Narazda, to prevent it from happening to others. That is the only reason she was not killed.
So much suffering. So much death. And finally, it has been brought to and end. Thank you."

Why not ask Adonatus to cure it?
"In a land such as ours, who is to say this one would be better off without such power?
Though this affliction may sometimes place her in danger, it has saved Narazda as well. After all, we live in troubling times."
You enjoy being a werewolf?
(Default circumstance) "This one will admit, there were struggles. Learning to control was not easy.
But through it all, she has gained strength. Power. Freedom. All things Narazda never had, before she was bitten. All things she would hate to lose."
(Player being a werewolf) "And do you not? Yes, Narazda knows who you are.
Surely you too have felt the duality of our affliction. This power, it is both curse and blessing. It has given us strength, power, and freedom. And hardship, of course. And pain."

But you didn't admit you were a werewolf when we first met.
Here the dialogue continues as for So you are a werewolf.

"Finally, that jekosiit has been defeated.
You've not only saved this keep, but many lives. Vykosa's hunger for power seemed never ending, and this one is glad it has been put to an end."

This Online-related article is a stub. You can help by expanding it.
Retrieved from "https://en.uesp.net/w/index.php?title=Online:Narazda&oldid=2127882"
Categories:
Hidden categories: