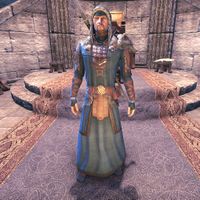 Archivist Ernarde is an Imperial member of the Moon hunter Pack and the penultimate boss of Moon Hunter Keep, who can be found in the keep's extensive library. Originally, he was part of the Silver Dawn as their chief archivist and had come close to a cure for Lycanthropy, until Moon Hunter Keep was overrun and he was forcibly changed by Vykosa. He is now compelled to turn his talent towards the enhancement of werewolves, no matter how many of the pack die to the horrific experimentation for Vykosa's vision of a werewolf army.

As a boss type enemy, Archivist Enarde is immune to all crowd control effects.

Shock
A basic ranged attack that deals minor shock damage.
Shock Blast
The boss channels a lightning beam on a random player dealing moderate shock damage over time.
Shock Pulse
The targeted player will explode after a moment, dealing moderate shock damage around themselves as indicated by a red circle. Keep away from group members if you are targeted.
Implosive Sphere
Archivist Ernarde will cast a Crushing Bubble around a random player. The bubble needs to be broken through damage, otherwise it will kill the target after a moment.

Summon Werewolves
At 80, 60, 40 and 20% health, two Moon Hunter Cleavers or Strikers will accompany Ernarde. They are on a timer and will transform into Werewolf Behemoths if they are not burned down. Focus on the adds and kill them before they transform to simplify the fight. The adds will also enrage if they are brought near the boss, so keep them separate.
Sigil Reflection
Standing outside the circles when Syymbols of Xarxes is cast will deal minor magical damage over time to you.
Symbols of Xarxes
The boss summons circles marked with colored Symbols of Xarxes around the room. The boss will then cycle through and select one color. Whichever color he eventually lands on will glow bright gold. When he picks a color, each group member must run to a circle which is glowing gold, as it will shield them from his spell. After a short moment the boss releases a huge burst of magic that deals very high (lethal on veteran) amounts of magical damage to anyone outside the safe spots. There are always four circles with this colored symbol hovering above them. Coordinate with group members to determine which direction each person will go to avoid overlapping circles with your group mates.

He can be found standing calmly on a dais at the opposite end to the library entrance. When you first enter he will say:

"I'll make sure to properly document this battle. After your defeat, of course."

If you stand around and not engage him, he will speak occasionally:

"I've heard you killed quite a few of my packmates. No matter. We can always rebuild."
"The Silver Dawn was foolish. Weak. Just like you."
"The Silver Dawn fell, but not I. I became something greater."
"You may have won against fang and fury, but my magic is stronger than you can imagine."
"You must be quite powerful to have made it this far. Pity I must kill you."

Engaging him in combat
"You shall invade this keep no longer!"
"You'll be but a footnote in my pack's glorious victory!"
"You'll fall against my magic and might!"

Moon Hunter Allies
"You can cut down our pack, but more will follow!"
"Siblings, join me in the hunt!"
"If you will not die, you leave me no choice!"

Werewolf Enhancement
"Here, you weak fool! Grow stronger with this!"
"I'll show you my pack's more bestial nature!"
"Too weak to fight. I'll just have to make you stronger."
"If magic won't do, how about fang and claw?"

Crushing Bubble
"I'll crush you in my trap!"
"You'll be crushed by magic's power!"
"Feel the crushing weight of my magic!"
"My magic will crush you!"

Cycling through Seals
"Let's see … which one, which one?"
"Now then … which should I choose?"
"Which one shall I choose?"
"Hmm … perhaps this one?"

Casting Seal of Xarxes
"The time has come to reveal my true might!"
"Now you shall face my true power!"
"Gaze upon true power! Gaze upon your deaths!"
"Yes! Now, this is true power!"

Group Wipe
"A valiant effort, though useless none the less."
"Your corpses shall be useful for my next set of experiments."
"Have no worries. I shall use your corpses wisely."
"I applaud your efforts, no matter how useless they were."