The UESPWiki – Your source for The Elder Scrolls since 1995
< Online: Places: Summerset / Ruins / Delves(Redirected from Online:King's Haven Pass Wayshrine)
Jump to: navigation, search

Some say Goblins originated in Summerset, and some say the High Elves brought them here to serve as menials and slaves. They no longer perform those functions, but freed or escaped, Goblin tribes still thrive in the island's loneliest corners. 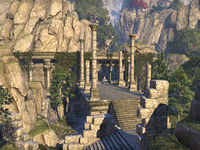 King's Haven Pass is a delve with two entrances found northeast of Cloudrest and east of the Illumination Academy.

The following letters can be found here: The Tale of Syrabane, Praise Be, Restoring the Welwas. 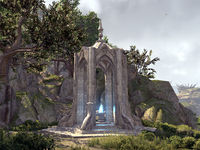 This Online-related article is a stub. You can help by expanding it.
Retrieved from "https://en.uesp.net/w/index.php?title=Online:King%27s_Haven_Pass&oldid=2172203#Wayshrine"
Categories:
Hidden categories: