The UESPWiki – Your source for The Elder Scrolls since 1995
< Oblivion: Items(Redirected from Oblivion:Grand Soul Gem)
Jump to: navigation, search 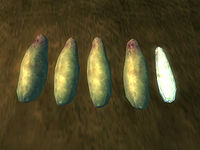 † These soul gems only become accessible as part of the Vampire Cure quest.
§ Carried by an NPC.