The UESPWiki – Your source for The Elder Scrolls since 1995
< Oblivion: People / Merchants / Spell Merchants
Jump to: navigation, search 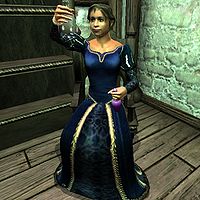 Selena Orania, an Imperial alchemist, is a Journeyman of the Mages Guild who sells alchemical supplies and spells at the Bruma Guild Hall.

Between 8am and 6pm, she has a 50% chance each of either reading a book from the guild library or mixing up potions with her mortar & pestle in the western room on the ground floor. At 6pm she will stop to eat dinner in the basement dining room for two hours. At 8pm she will again have a 50% chance each of either studying Alchemy by reading the common text Fundaments of Alchemy or wandering around aimlessly, and will perform her chosen action in a room in the Guild basement for five hours. At 1am she calls it a day and sleeps for seven hours. Like most of the Bruma chapter, she is killed when the hall is attacked during the A Plot Revealed quest.

She has 800 gold and a Mercantile skill of 40. She will buy ingredients, potions, alchemical apparatus, and miscellaneous items from you while selling only alchemical supplies. She will offer her bartering and spell-selling services when not eating, sleeping, or studying Alchemy in the evening. Make sure to buy any spells that you want before she dies, particularly the Fortify Health spell, which is the only non-Expert level spell with that effect.

When approached for the first time, she will introduce herself: "My name is Selena Orania. I'm a Mages Guild Journeyman." Like fellow guild member Volanaro, she would rather live somewhere else: "Well, sometimes I feel we're not welcome here. The Nords don't like Heartlanders very much." When asked about the Guild, she will have a piece of advice for you: "Volanaro has a twisted sense of humor, but he also has a few nice spells up his sleeve. If you want to summon a Bound sword, talk to him." When asked the same question, Volanaro will return the favor: "It's a shame that Selena doesn't join in our fun, but she takes her role as an Alchemist very seriously. If you need supplies, she's the one to see." If you present her with a sample of nirnroot, she will admit that plants are not her area of expertise. Luckily, she knows someone who might be able to help out: "What was it called again? Something... root. Agh. Sorry, I can't remember. I'm afraid unusual plants are not my area of expertise. I think I'll have to refer you to Sinderion. He's a fantastic alchemist in Skingrad who specializes in this sort of thing."

She's also not too fond of Volanaro and J'skar's constant pranks on their self-centered leader, Jeanne Frasoric. If her disposition towards you is less than 50 she will be rather reluctant to share info about the missing J'skar: "I haven't seen him in days. Volanaro said something about a spell backfiring, making him permanently invisible. Maybe you should go see him about it. I don't feel like talking about it with you." After a bit of persuasion, she will add: "Look, I like you and all, but I really don't want to get in the middle of this. If Volanaro and J'skar want to have their fun, fine. I'm not going to participate, and I'm not saying another word about it. Take it up with them." When you have talked to Volanaro, Selena will be ready to share her opinion on Jeanne: "I suppose I like her well enough. It's a shame she doesn't know more about her craft, though. Still, I don't quite think she deserves the hard time the others give her."

She wears upper-class attire consisting of a blue velvet outfit and a pair of blue suede shoes. She also carries her book, her mortar & pestle, an empty grand soul gem, a Mages Guild key, and a sizable amount of gold. She doesn't carry any weapons, relying instead on a series of medium-level spells from all of the magical schools; these are also the same spells that she will sell to you.

She owns all of the items found inside her room on the ground floor. These include two copies of the standard text Fundaments of Alchemy, two empty soul gems, almost three complete sets (one misses a calcinator) of novice-level alchemy apparatus, three scrolls (two Light and one Frost Damage), three potions (two Restore Health and one Restore Intelligence), and the minotaur horn found in the main hall.