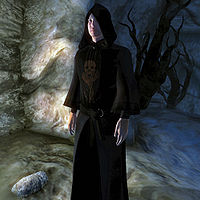 The Worm Anchorite is an Imperial necromancer. He is found in Dark Fissure, where he only appears if the player has reached stage 50 of the Necromancer's Moon quest.

He can be found wandering around the interior of Dark Fissure for seven days in a row, never even eating or sleeping. At midnight on the 8th day, when the Shade of the Revenant is visible, he will exit the cave and approach the altar outside and perform the ritual to create Black Soul Gems. He will stay by the altar until the Shade disappears at midnight on the next day, then reenter the cave. For more details on the actual times and dates, see the Soul Gems' page.

During the related quest, he will comment to anyone but the player about the ritual of Black Soul Gem making: Now, while the Shade of the Revenant blankets this world, I give these gems as an offering. May the power of the true god fill and change them. When fighting with you he can be heard saying: You will not stop us. The Order of the Black Worm will consume all in its path. His third unique dialogue, The Order of the Black Worm will feast on your soul, mortal., has a funny turn to it. Although it was obviously meant to be for the player only, you can hear him saying it to anyone.

He wears the standard necromancer's robe, a hood and a pair of doeskin shoes. He carries a small amount of gold, two empty lesser soul gems and the handwritten note needed for the related quest. In combat, he will rely solely on a leveled set of necromancer spells.