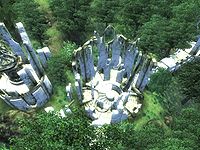 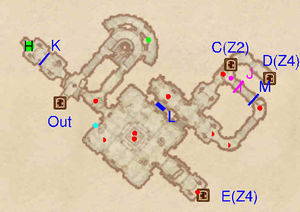 After entering, make your way around the horseshoe corridor and loot the chest nearby. To your right is an underwater area; beyond the locked gate at K is a chest (H) containing dead drop instructions for the A Kiss Before Dying quest. The chest will not be present before the related quest and is empty after it. The gate can be opened with a Rusty Key found in a chest in Nornal Ageasel.

Turn left and fight your way past up to 4 mudcrabs or rats. Pressing on to the southeast leads to door E to Nornal Varlasel, which is guarded by another animal. For more efficient exploration, press the push block (cyan dot on map) hidden behind some broken crates in the western corner of the room. This opens the wall at L. Beyond are a marauder and up to three animals.

Continuing up the corridor and stairs eventually leads to door D. On the way, you'll face another marauder, a locked gate (M) and a swinging mace trap (I). Instead, head into Nornal Ageasel first via the door at C. 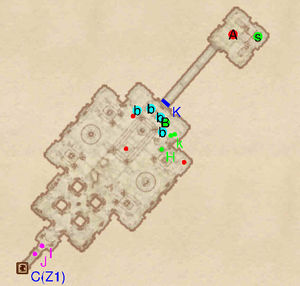 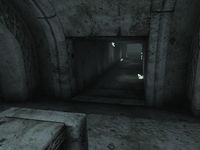 This zone is very straightforward and linear. After dodging the two swinging mace traps at I, push forward into the main room. There are two marauders and a skeleton fighting each other, so wait out the fight and mop up. There are 12 Welkynd stones set atop low pedestals or on the floor, as well as a boss chest (B), 4 minor loot chests and 4 bedrolls (b). The chest at k contains a Rusty Key which opens a gate in the first zone.

Provided you are at least at Stage 30 of the Vampire Cure quest, the hidden door at K is added. Beyond it are a boss level undead (B) and an empty grand soul gem (s). Following the quest, the section remains in place for the remainder of the game. 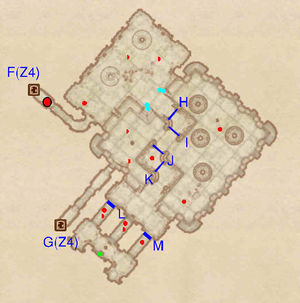 When entering from door F, you may immediately come across an Orc Adventurer (O). Follow the stairs down into the main room, battling up to three animals. There is now a zig-zagging stone bridge in front of you, leading across the water that covers most of the room. The gates at H, I, J and K are activated by the push blocks (cyan dots on map) near the start of the bridge.

Opening the gates can be tricky, as the push blocks will change behavior depending on whether one of the two gates each is linked to is open or closed. The exception to this rule is the lower push block on the right hand side. This only ever toggles gates H and K. To open the gates, hit the top right button, then the bottom left one and finally the bottom right one.

Cross the bridge, dispatching the animal guarding it. Once you reach the southwestern wall, the hidden doors at L and M will open. Beyond them are up to 5 enemies, a mix of rats and undead. Loot the chest nearby and then jump into the water. Fight off up to 4 slaughterfish and swim to door G, which leads back to Nornal Varlasel. 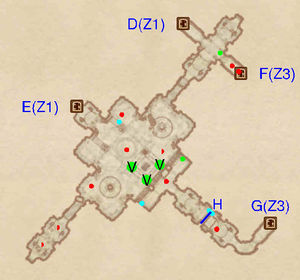 Upon entering from door D, you will find yourself on a narrow stone bridge overlooking a corridor below. Defeat the two marauders ahead and enter Nornal Goriluch through door F.

When re-entering from door G, dispatch the nearby animal and open the gate at H by pressing the push block nearby. Beyond it is a marauder archer on a balcony overlooking a room. Kill him, loot the chest to the right and press the push block on the left, which opens one of the Varla stone cages at V.

Jump down and battle the marauder and animals below. The other two Varla cages are opened with push block in the northern corner of the room. To the northeast is a room with a minor loot chest, while up to two animals await up the stairs to the southwest. When you're done, head back to the first zone through door E.