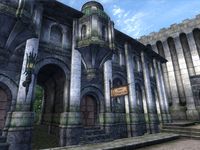 Edgar's Discount Spells is a store that sells cheap spells in the Imperial City's Market District. It is found in front of Slash 'N Smash and next to Rindir's Staffs and Stonewall Shields.

The proprietor, Edgar Vautrine, has 800 gold and a Mercantile skill of 40. He sells cheap spells from all of the magical schools. He should have been able to sell the unique hood Veil of the Seer, but doesn't due to a bug. 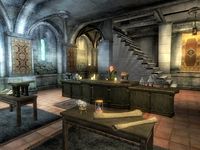 The main trading room is on the ground floor and consists of a counter and a display of scrolls, soul gems and alchemy apparatus. The room appears spacious and well organized and is dimly lit from the many torches hanging from the ceiling. The front door opens to the sight of a larger area with several available chairs for waiting customers. In the middle of the room are two exhibition tables. The one closest to the door holds two scrolls: one of absorb skill: Mysticism and one of minor heal other. The other table has six scrolls on display: Three alluring gaze, two absorb skill: Mysticism and one minor heal other. Also on the table is a copy of Fundaments of Alchemy.

Against the northern wall, a set of shelves holds even more scrolls: two minor heal other, one alluring gaze and one absorb skill: Mysticism. The shelves near the southern wall holds three scrolls: absorb skill: Mysticism, alluring gaze and minor heal other, one of each. On top of the shelves is a novice alembic. In the corner by the basement door is a cupboard filled with clutter.

The big counter along the stairs showcases five soul gems – three petty, one lesser and one common – and another alembic. Following the counter towards the staircase, you will find a few books; two copies of A Less Rude Song, two copies of Manual of Spellcraft and another copy of Fundaments of Alchemy. Also on display are two retorts, two mortar & pestles and one calcinator. Behind the desk is a small table with a lectern filled with various writing materials. This is the only safe container in this room. 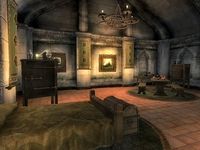 Edgar sleeps upstairs, as is common with Market District merchants. The private quarters are just as well organized as the main trading room and consists of a single room which functions as bedroom and dining room in one. The door opens to the sight of a small table with three bottles of Tamika's West Weald Wine and a wheel of cheese.

Following the wall to the northeastern corner, another snug arrangement has been set up: a chair and a table which holds three strawberries a bottle of cheap wine and a copy of Brief History of the Empire, v 1. The cupboard near the bed holds clutter, as does the chest at the foot of the bed. Following the wall towards the alcove is a chest of drawers and a sack with clutter. On top sit two apples, a bottle of cheap wine and yet another sack with clutter. These two sacks are safe to store items. Stashed in the alcove is a crate, two sacks (they are also safe containers) and a barrel, all of them with clutter. The unlocked chest has a chance of some silverware and/or gold. In addition, it doesn't respawn. On top of the crate are three pumpkins and two watermelons. 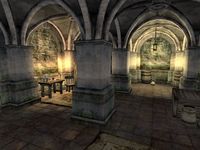 The basement area functions as both storage room and alchemy lab. Along the northern wall, at the bottom of the stairs, a wooden table with two alembics. Next up, an open foodsack (the first safe container) and a crate with clothing or ingredients. In the northwestern corner are two barrels, one with clothing and one with clutter and a possibility of a repair hammer. The sack here holds only clutter and is the second safe container. In the next corner are a barrel with food, a crate with clothing and an unlocked chest with up to three pieces of randomly chosen equipment. This chest is the third safe container in the basement.

A cupboard with clutter has been set up next to Edgar's small alchemy research table, which holds an alembic and a mortar & pestle, as well as a few ingredients: two samples of cinnabar polypore yellow cap, two samples of clouded funnel cap and one rare sample of dryad saddle polypore cap. In the last corner, a sack (the fourth and the last safe container) and a barrel, both with clutter.