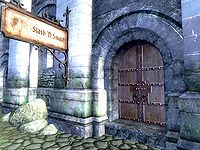 Slash 'N Smash is a weaponry store located in the Imperial City's Market District. It is found across the street from Edgar's Discount Spells and next to the Mystic Emporium and The Gilded Carafe. The shop is open every day between 8am and 8pm. On Loredas and Sundas between 8am and midnight.

The proprietor, Urbul gro-Orkulg, has 800 gold and a Mercantile skill of 40. When bartering, he will buy your weapons, armor and miscellaneous items while only selling blunt weapons. Strangely, this store doesn't have a unique item for sale. Urbul also offers repair services. 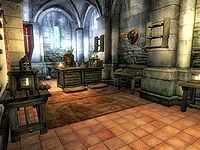 The main trading room is on the ground floor and consists of a counter and a display of various armor and weapons. For decoration, several skulls and bones are scattered around the many weapons on display. Several carpets have been hung on the walls and on the eastern wall, two hunting trophies watch silently over the shop: the head of a deer and a minotaur. Compared to some of the other shops in the District, the shop appears bare at first glance as most of the exhibit tables are just plain wood with some weapons laid out. The front door opens to an exhibition table along the eastern wall, showcasing an iron battle axe and a similar one in steel. Following the wall, the next table has an iron warhammer, an iron mace and an iron war axe. Opposite this table, another table showcases a club, a steel war axe and a steel mace. On a small podium, Urbul has used a skull to demonstrate the use of an iron helmet. In the corner at the bottom of the stairs, you'll find a practice pad for testing.

On top of the counter lies a steel warhammer as well as four copies of Mixed Unit Tactics and four of Manual of Armor. Hidden behind the counter is a very hard locked chest with two or three leveled pieces of equipment. This chest does not respawn. On top of the chest sits a repair hammer. On the table lies a leather shield and underneath the shield, another repair hammer. Underneath the table, a pair of leather boots and a sack with clutter and clothing. In the corner by the basement door, a desk reveals even more clutter. 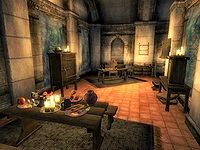 The private quarters consist of a single room which serves as a dining room, work-room and bedroom in one. Again, most of the furnishings are made out of raw wood. His bed is located in the southwestern corner and is spacious enough for two, even though he lives alone. Near the door, a well-provided table holds different foods: four leeks, four potatoes, two carrots, two strawberries and a single apple. At the eastern wall, a cupboard holds even more food and on the top sits a head of lettuce. Opposite the cupboard, in the wine rack, there's nine bottles of Cheap Wine. An additional two bottles have found their way to his worktable. There is also an iron war axe, a shopping list and a lectern with clutter. Against the southern wall, some drawers holds some spare clothing. On top of the drawers, next to the bellows, there's a spare blacksmith's apron as well as a pair of rough leather shoes on the floor. 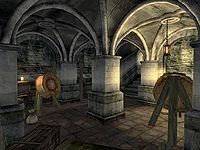 At the bottom of the stairs, you will find a barrel with a chance of a few gold coins and a repair hammer. Following the wall, past the target practice pad are two crates, one with clothing and one with clutter. Also, an empty barrel and a sack with even more clutter. The locked chest only contains more clutter and clothing and in the opposite corner, next to another target practice pad, a barrel with clothing.

All over the Imperial City, people have noticed the shop with the catchy name: