The UESPWiki – Your source for The Elder Scrolls since 1995
< Morrowind: People / Merchants / Spell Merchants(Redirected from Morrowind:Thervul Serethi)
Jump to: navigation, search 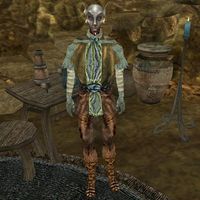 Threvul Serethi is a Dark Elf healer who has a shop in Sadrith Mora, where he sells ingredients, potions, and spells to all who need them (you do not need to be a member of House Telvanni, though you will receive a discount). Threvul is a restocking vendor of the following ingredients: Bittergreen Petals, Corprus Weepings, Hound Meat, Netch Leather, Scrib Jelly, Scuttle, Small Kwama Egg, and Wickwheat. Additionally, he owns three Violet Coprinus which grow in his shop. These will also restock, but only after the mushrooms have had a chance to grow back.

Threvul has the following spells available for sale: