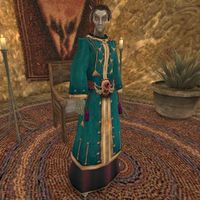 Aryon is a Dark Elf sorcerer living in Tel Vos. He is a Master in House Telvanni and appears to be the most fair and open-minded Councilor of the house. This is evident when looking at his tower which is something of an oddity even for a Telvanni: a Telvanni mushroom tower integrated into an Imperial castle. Somewhat isolated on a council of anti-Imperial isolationists and eccentrics, he is desperately looking for new allies, be it his old mentor, Divayth Fyr, or Baladas Demnevanni. Smokey Morth has been saying - entirely correctly - he is doing so with the ultimate aim of usurping the Archmagister. However, once you yourself become powerful enough in House Telvanni, he will instead support your bid to replace the incumbent Archmagister. He is also rumored to have enchanted a pair of gloves in his youth with powerful conjuration spells.

During the Telvanni Hortator part of the Main Quest, Aryon understands the whole situation and immediately gives his vote for you to become Hortator of House Telvanni. He also offers advice on how to deal with the other Councilors. This is an example of his differences with the rest of House Telvanni, who are mainly concerned with slavery, artifacts, and their magickal studies.

Aryon wears an extravagant robe with matching shoes. He carries three quality restore health and quality restore magicka potions, a scroll of the black storm, a scroll of manarape, and a daedric shortsword. Aside from his natural resistance to fire and the sanctuary provided by his ancestors, he can cast a spell from the school of Destruction known as Aryon's Rest, which, as the name suggests, is a spell that is unique to Aryon and which drains the target's fatigue whilst burdening them.

After you have accepted this quest from Galos Mathendis, you can travel to Tel Vos and ask Aryon about the ingredient which he is after. If you do not have any Daedra skins in your inventory, he will politely ask you to fetch one for him:

Mentioning the topic while you do have at least one Daedric skin in your inventory will prompt him to ask you give it to him in exchange for a sizeable amount of drakes:

After you have finished this task, you can talk to him again about Daedra skins, which will prompt him to tell you that he has enough of them for the time being:

Once you have become a Lawman in House Telvanni, you will need to find a patron in order to continue to rise through the House's ranks. An inquiry in the Telvanni Council House in Sadrith Mora will make it evident that Aryon is your best bet, and as it turns out, the sorcerer is indeed willing to lend you his support, provided that you do him a favor first:

True to his word, Aryon names you his Mouth when you confirm that Baladas has agreed to join the Council and will moreover offer you a gift as a token of your new station within House Telvanni:

After the completion of the quest, Aryon has the following things to say about Baladas and your success in getting him to join the Council:

The first task that you may complete for Aryon after you have become his Mouth consists of curing a Kwama queen that has contacted a blight disease in a nearby egg mine:

If you mention the mine again before you have completed the task that Aryon has given you, he will reiterate his request that you head there and cure the blighted queen:

In the event that you killed the queen which you were supposed to cure, Aryon will suggest that you revisit the mine in a bit and hope that a new queen will have taken the old one's place by then:

If you report to Aryon after you have successfully cured the Kwama queen, the sorcerer will be pleased and will offer you a valuable book as a reward:

Once the quest has been completed, Aryon has little more to say about the subject:

Before you continue to rise further up the ranks in House Telvanni, Aryon wants you to learn a triplet of spells:

You can talk with Aryon again after receiving this quest to obtain some advise on where you should look to learn the wizard spells:

Speaking with Aryon after you have learned the rudimentary wizard spells will prompt him to express his satisfaction with your progress and to reward you with yet another valuable book:

Alternatively, you may also finish the quest right after receiving it, namely by learning three suitable spells before accepting this task from Aryon. In that case, Aryon will be even more pleased, as is evident from the greater increase of his disposition than the one that you would otherwise receive:

The topic remains open for discussion after the completion of the quest, even though Aryon will have little more to add to that which he has already said about it:

For your next chore, Aryon will want you to come to the aid of a fellow member of House Telvanni:

The reward that you will receive for dealing with the Hlaalu forces at Odirniran depends on whether you heard Milyn Faram out about his research (which is only possible in the first place if he survives and if you did not kill his prisoner, Vedelea Othril). If you did, Aryon will reward you with a book and a staff:

Else, the only reward that you will receive for this quest will be an immaterial one (namely a disposition and reputation increase, which you will receive regardless of how you handled the quest exactly):

Regardless of the fate of Faram and his captive, Aryon will give you the same response after you have completed the quest:

After your success in dealing with the situation in Odirniran, Aryon entrusts you with a more diplomatic task:

If you carried out the task as Aryon requested, he will be pleased to hear the news of your success and will reward you with a powerful, enchanted glove:

On the other hand, if you killed too many Redoran Councilors for it to be possible to gain the three votes that he requires, you will forgo all the rewards that he would otherwise have offered to you (although, like a true Telvanni, Aryon is otherwise completely unphazed by your murderous tendencies):

If you mention the topic again after you have completed the quest, he will say:

With the matter of the Mages Guild monopoly out of the way, it is time for you to rescue another damsel, er, Telvanni sorcerer in distress:

From this point onwards, Aryon's dialogue (along with the rewards that he may or may not give you) depends on how you handle the situation in Shishi. If you kill the leader of the Redorans and make sure that Faves Andas survives the ordeal, he will be happy with your efforts and will reward you accordingly:

If, on the other hand, Faves Andas is no longer among the living by the time that the siege is over, Aryon won't give you anything for your trouble:

Mentioning the topic after you have completed the quest prompts Aryon to say the following.

After you have completed all the other tasks that Aryon may give to you and after you have become a Spellwright in House Telvanni, Aryon will deem you ready to take on a protégé yourself:

When you return to Aryon after recruiting Fast Eddie as your Mouth, he will promote you to the next rank in House Telvanni (and present you with another enchanted glove):

Talking with Aryon about this topic after the quest has been completed will have him say the following.

If you ask Aryon about chores after the first phase of the construction of your stronghold has been completed, he will ask you to "retire" the owner of another stronghold:

Since Rethan Manor appears as soon as you initiate the construction of your own stronghold, it is possible that you have already killed Raynasa Rethan. Regardless of whether that is the case, Aryon will be happy to hear that the Hlaalu noble has been disposed of:

Mentioning the late Rethan's name to Aryon after the quest has been completed prompts him to say:

As Aryon is far too considerate to let the Redorans feel left out, he will next ask you to pay a visit to a Redoran stronghold:

As with Raynasa Rethan, it is possible that you killed your mark before Aryon asked you to do so. Either way, Aryon will be happy to hear that Vvardenfell is one Redoran noble poorer:

The topic remains open for discussion after the completion of the quest, even though Aryon has little more to say about it:

Once the second phase of the construction of your own stronghold has been completed and Banden Indarys has been dealt with, asking Aryon about either chores or advancement will prompt him to offer to declare you a Magister in House Telvanni:

There are two special cases in which Aryon will immediately name you Archmagister. The first case is if you already killed Archmagister Gothren before Aryon offered to name you Magister:

The second case is if you were named Telvanni Hortator before Aryon gave you the option to become a Magister:

In contrast to what he initially says to you, Aryon is willing to declare you a Magister even after you have become a Master:

Return to Aryon after you have killed Gothren to receive your final advancement in House Telvanni:

Asking Aryon about either the topic of Advancement or that of Magister after you have become an Archmagister prompts him to remind you of your new rank: