The UESPWiki – Your source for The Elder Scrolls since 1995
< Morrowind: People(Redirected from Morrowind:Vedam Dren)
Jump to: navigation, search 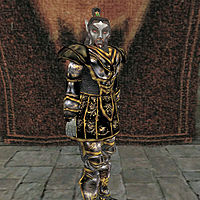 Duke Vedam Dren is the Duke of the Imperial District of Vvardenfell in the province of Morrowind. Of noble descent, Dren was Hlaalu Grandmaster of the Vvardenfell district before he inherited his title. He rules from the Grand Council Chambers in Ebonheart, surrounded by Dunmer and Imperial Counselors.

Vedam Dren is a Dark Elf knight but also considers himself a noble, a leader and a diplomat. Additionally, he is the older brother of Camonna Tong head Orvas Dren, who runs the Dren Plantation, and the father of Ilmeni Dren, the leader of the abolitionist group Twin Lamps, whose goal is to end slavery by means of constant activism.

The Duke is essential for completing many high-ranking House Hlaalu, Redoran, and Telvanni quests, since he is the only one who has the authority to grant you a construction contract for your stronghold. If you belong to House Hlaalu, Dren is also the only person in the game who can promote you to Grandmaster.

The Duke is guarded by the Duke's Guard but is otherwise surprisingly weak himself, mainly because he uses a shockbite mace even though he is not well-trained with a Blunt Weapon. Still, he wears an almost complete set of ebony armor (without the helm) which makes him pretty tough. He also has a Construction Contract on him, though it is useless without the relevant quests (aside from its value of 5000 drakes of course). Aside from his natural resistance to fire and the sanctuary provided by his ancestors, he knows the spells Rest of St. Merris, Great Heal Companion, Resist Fire, Seryn's Gift, and Cure Poison.