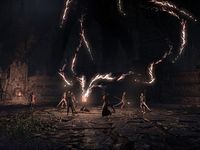 The Root-Whisper Tribe was an Argonian tribe that resided in Root-Whisper Village. In their past life they came across the Barsaebic Ayleids who raided into their xanmeers and as a final countermeasure, they created the artifact known as the Remnant of Argon that would preserve their souls in a different reality.

In the Second Era, during the Vestige's expedition through Murkmire, they went into a vision to learn more about the tribe. There they learned of the Remnant and was granted an artifact which materialized from the vision into reality known as the Rootmender's Staff with the ability to locate the Remnant of Argon with the purpose of freeing the souls of their tribe.

The Imperialized Argonian Kassandra who was aiding the expedition revealed herself to be a traitor and snatched the staff from the Vestige. She used the Staff to locate the Remnant and found it in a xanmeer where she was devoured by a Miregaunt and the Vestige had to put her down. What she planned to do with the artifact that contained the tribe's souls was anyone's guess. After Celebrations of their victory over the Blackguards, both artifacts retrieved, the Argonians of Murkmire granted the Vestige the Rootmender's staff along with the title of Rootmender.

This Lore-related article is a stub. You can help by expanding it.
Retrieved from "https://en.uesp.net/w/index.php?title=Lore:Root-Whisper_Tribe&oldid=2123494"
Categories:
Hidden categories: