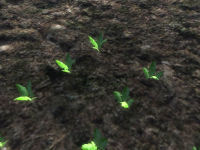 Radishes are farmed throughout Cyrodiil. They are identified by a clump of leaves growing out of the ground. 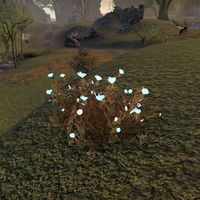 Rain flowers are delicate blue flowers that grow within Greenshade in Valenwood. Dew Bugs tend to hide among them.[1]

Red Coldberry is an herb found in northwestern Tamriel. Its leaves can be used in potions to cure illnesses. 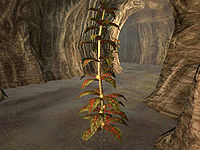 An extremely tall red and green plant found in the Mania portion of the Shivering Isles. It has several small yellow gas bladders which can be harvested for alchemical purposes. 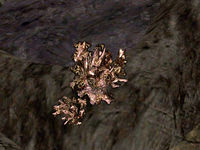 Red lichen is a rare plant, found growing on rocks in the Ashlands of Vvardenfell.

This plant grows in the shade beneath cliffs and near rocks. It was used by an alchemist during the Interregnum to create a potion that would counteract the effects of fumes that had suddenly filled the Deepcrag Den kwama mine. Rice can be found in food larders throughout Cyrodiil, but it does not grow there. Rice plants are sometimes cultivated in alchemy gardens. 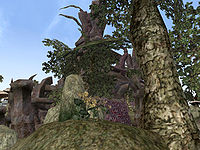 Roland's Tear is a rare variant of Gold Kanet once found exclusively in small amounts in the Ascadian Isles, near the ruins of Ald Sotha. It was sacred to the Tribunal, and was sacrificially burned at shrines. It was also prized by alchemists for its wondrous powers when used in potion making. A single red-petalled specimen was held by the Aldmeri Dominion in a secure vault in Marbruk circa 2E 582. The flower likely went extinct during the Red Year, when Baar Dau's impact destroyed the surrounding area and created Scathing Bay. 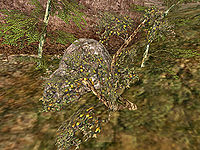 Roobrush is a common shrub found throughout the West Gash region.

The Root (or Root System) is a theoretical living organism that connects all plant life in Shivering Isles. 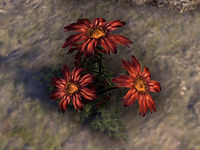 A flower sacred to the goddess Mara, these flowers are only found on Summerset within Archon's Grove. The Rose was discovered by the poet Nenamil, Archon of Song, who realized upon seeing them that Mara was beauty incarnate. The Sapiarchs use these flowers in a religious ritual during their 58th Day of the Divine Reverence of Mara.[2][3] 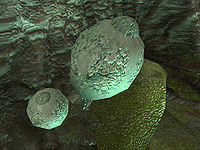 Rot Scale is a white scaly plant found primarily in caves in the Dementia region of the Shivering Isles.