Valendula is an herb found in northwestern Tamriel. It can be used in healing poultices. 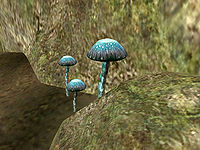 A patch of Violets

These small purple flowers can be found in various provinces throughout Tamriel. A popular choice in the manicured gardens of Summerset. 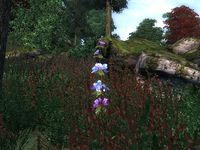 Viper's Bugloss is a plant with violet and vivid blue flowers on a branched spike, with all the stamens protruding. It grows abundantly in the Great Forest region and can also be found throughout the West Weald region. 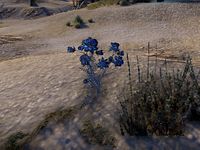 Void Bloom, also known as Void Flower, is a low-lying plant with blue and black flowers whose fibers can be spun into thread and used to make Voidcloth clothing. 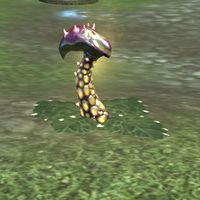 A plant that spews deadly toxins, found in the Daedric demi-plane of Maelstrom during 2E 582. This plant grew when the Demiprince Fa-Nuit-Hen's Barons had created a majestic arena to test the mettle of warriors from all over. Particularly, this plant thrived in a sub-region known as the Vault of Umbrage, which resembled a dense swamp. It can be magically manipulated to spew its toxins.