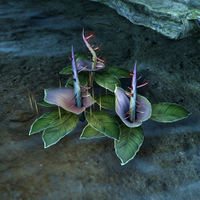 A delicate aquatic flower that is often planted by Khajiit in remembrance of beloved family members who have passed to the Sands Behind the Stars. They only blossom during Jone and Jode's waning. 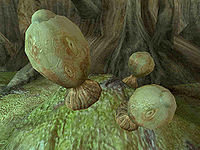 Watcher's Eye is a bulbous root native to the Shivering Isles, found in the cave systems of Dementia. 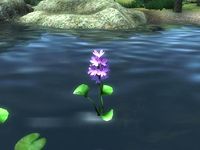 The Water Hyacinth is a pink flowering aquatic plant, sometimes found near Sacred Lotuses. It grows in almost any body of water across Tamriel. 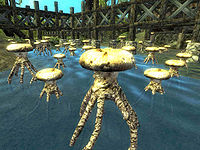 Water Root Pods are creamy colored plants native to the Shivering Isles, growing out of the beds of water in the Dementia region.

A Watermelon Vine on a farm

Watermelon vine is a leafy plant found growing on several farms in Cyrodiil. 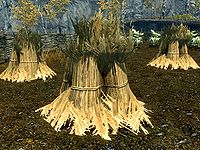 Wheat stalk is the tall, thin golden colored plant found on many farms throughout Cyrodiil and Skyrim. 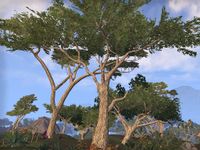 White Sycamore trees are sacred to Khenarthi, as their seeds are carried far and wide by the wind.[1][2] White Sycamore bark can be used to make white paint.[1] 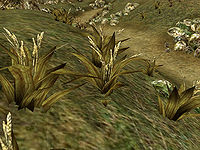 Wickwheat is a wild Ashlands grain with modest magical properties that grows in the Grazelands of Vvardenfell.[3] It can be fermented to brew ale.[4]

A Weeping Willow
Found in: 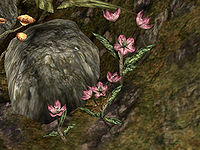 Willow flower is a pink flowering plant found in the Ascadian Isles and on Azura's Coast. 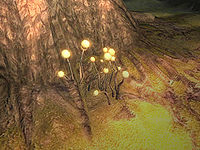 Wisp core is harvested from Root stalks found in the cave systems of the Shivering Isles. 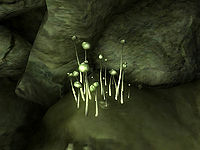 Wisp Stalks are tall, thin, white mushrooms that grow inside caves and ruins in small clusters.

Wisteria is a flowering plant adored by the Altmer of Summerset in decorative window arrangements. Coming in purple and blue varieties, the flowering plants drape from leafy green brush. 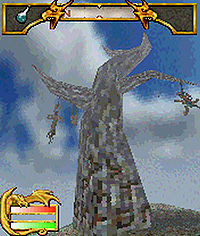 The Witch Tree is a mysterious sentient tree found in Ghast's Pass in Hammerfell. For more information, see the main article. 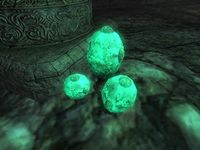 Withering moon plants are the bright glowing plants native to the Shivering Isles, found in the caves of the Dementia region. 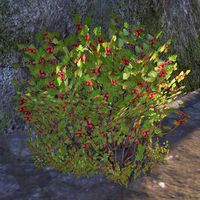 Wolf's Woe is a bush with small red flowers which can be found growing in Glenumbra. When the plant is crushed, it produces an odor which scent-sensitive creatures like wolves will actively try to avoid.[5] 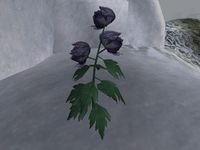 Wolfsbane is an incredibly rare, strong-smelling flower found on Hvitkald Peak in the Moesring Mountains on the island of Solstheim. It is heavily associated with lycanthropy, and is sometimes used as incense. 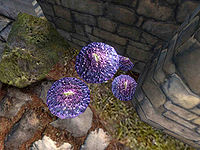 Worm's Head is a purple capped mushroom found in the Mania region of the Shivering Isles. Lizards enjoy eating them, but they are also poisonous to the critters.[6] 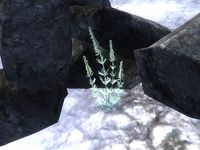 Wormwood is a scraggy plant that grows sparingly throughout high elevations and the Jerall Mountains in the nooks between rocks.

Wyrd Flowers grow only in moonlight within Ayleid ruins. 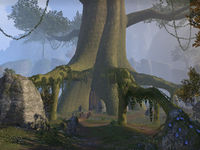 The Wyrd Tree is a giant tree that is the source of all life in Glenumbra. The tree lies within the center of a secluded glade deep in the forests of Daenia in Glenumbra. The Beldama Wyrd make their home here. The tree supposedly has a connection to the bones of the earth.