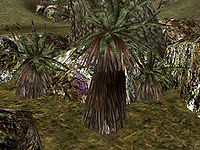 Hackle-lo is a succulent leaf of the Grazelands, prized both for its taste and its roborative powers. 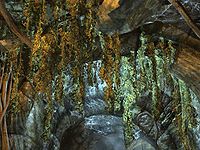 Hanging Moss inside a dungeon

A wall clinging plant found growing abundantly all across Skyrim. 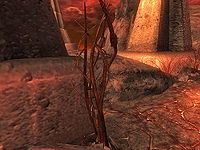 Harrada Root is a plant native to the Deadlands, where it grows both outdoors and in caves. It will swipe its spiky roots as a defense mechanism. 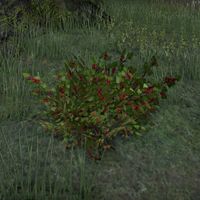 The berries from this plant are used in making poultices to aid the wounded. They are found near the settlement of Westtry in Glenumbra.

Healer's Purse is an herb found in northwestern Tamriel. It can be used in healing poultices. 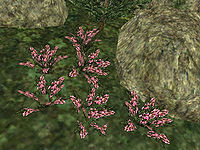 Heather is a common low evergreen shrub of the Ascadian Isles, known for its small, pinkish-purple flowers.

These lovely red flowers can be found in several regions across Tamriel. They are popular garden flowers in certain parts of the Rift. 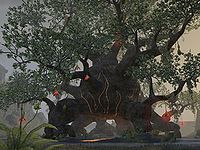 The Hist are a species of giant spore trees growing in the innermost swamps of Black Marsh. Argonians are known to have deep connections with the Hist, calling themselves "people of the root", and licking the leaking sap of their trunks in religious rites. Others claim the trees are, in fact, a sentient race, more ancient than all the races of man and mer. Hist trees usually have red bioluminescent flowers growing out of them, but the Naga-Kur Tribe’s one does have blue flowers. One tribe dedicated to ice spells have a Hist that drips with icicles and is said to be located deep within Black Marsh. 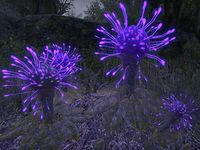 Hist Bulbs are a species of plants native to Murkmire and possibly other parts of Black Marsh. They have bioluminescent growths and produce a natural insect salve when threatened.[1] It is unknown if they are related to the Hist. 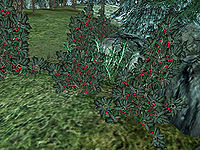 Holly Bush is a very common shrub that grows alongside bushes all across Solstheim. 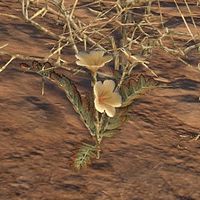 A sweet-smelling flower that grows in northern Elsweyr. It can be used as a substitute for honey if properly prepared. 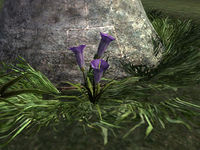 Horn Lilies are a purple flowering plant, domesticated by citizens of Mournhold.

These orange flowering plants make lovely garden flowers, and are cultivated in many parts of Tamriel. 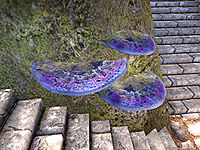 Hydnum Azure are a bluish purple, spore producing shelf mushroom found growing in the Mania region of the Shivering Isles. 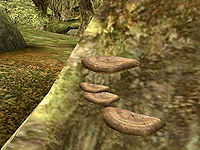 Hypha Facia is a light brown shelf fungus collected from the trunks of trees in the Bitter Coast Region.