This article is about the city. For the Daedra of the same name, see Lord Warden Dusk. 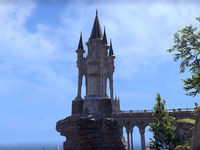 Dusk (formerly known as Dusk Keep[1] or the Tower of Dusk)[2] is one of the eight major city-states of the province of the Summerset Isles,[3] being situated on the southeastern point of the Summerset Isle. It acquired its name because when the sun sets behind the mountain, it leaves the tower in a shroud of shadows.[4]

Dusk is located on the shores of Summerset Isle, hidden behind the southern mountains, only accessible through a narrow valley behind the town of Sil-Var-Woad. Dusk Keep is the only building in the area, and it overlooks the beach where the valley empties into the Eltheric Ocean. Buried deep in the mountains, west of Dusk lies the Colossal Aldmeri Grotto, a vast cavern with ancient ruins that once served as the High Elven navy's watering spot.[5] The area is known to contain a variety of Gryphon known as the Pale-Plume Gryphon, which are uncommon and live in the seaside cliffs of Dusk Keep.[2] Dusk is neighbored by several settlements, including Archen Grangrove in the west, and Silver Wood in the northeast.[3]

For the longest time, the site where Dusk would be located contained nothing but Dusk Keep, an isolated tower that held some sort of magical containment. The tower's origins are unknown, and it would remain there for quite some time, as far as the late Interregnum.[1] When the explorer Gjadil the Keel-Hauler raided the palace of King Orgnum, she quickly fled Pyandonea with the whole Maormer fleet chasing after her, eventually leading them to the cove at Dusk. She fled to shore, clutching a single chest of treasure, burying it with an enchantment it so that only her descendants could open it, and made her way back home.[6]

Ertival, the keeper of the tower, had a vision of the impending abyssal geysers and Yaghra hordes set to invade the island, and left his journal detailing the recounting of his dreams before leaving the Keep.[7] In time, a group of Gjadil's descendants came to Dusk during the Daedric War and dug up her treasure, only to discover it contained nothing but a scroll relaying the importance of family.[6][8] During the time of the Second Aldmeri Dominion, in the ninth century of the Second Era, a port was built near Dusk Keep, which would then become the basis for the modern-day city-state of Dusk.[4]