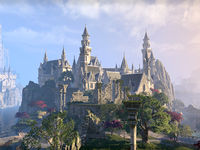 Lillandril is one of the eight major cities in the province of the Summerset Isles,[1] situated on the western hills of the Summerset Isle. The city is known for scholarly pursuits, various institutes such as the College of Sapiarchs and the Illumination Academy were both found in vicinity of the coastal-town.[2] The city's symbol is the Flask of Lillandril, an enchanted bottle that absorbs the magic used against the bearer, with an infamy that was embraced by the people.

Lillandril is built atop the hills on the northwest coast, where the land gives way to the ocean to form the lowland and sunken basin. The roads are flooded by the water but slowly ascend towards the settlement. Despite serving as a port-town in this area of the island, it is intricately built on the hill, slowly rising up until it reaches the upper platform and the Kinhouse, well-above the sea level and with a grand view of the sea. The open-aired main street, which leads to the upper platform coils around the mountain, and everything in between was crowded alleys and stairways. At the height of Lillandril lies the portal master, who guards an egress that transports people to the College of Sapiarchs. It is an academic compound built atop of an island off the coast of Lillandril, where many kings and queens of Summerset go to study on their way to kingship.[3] Lillandril is neighbored by several settlements, including Karnwasten Moor to the southwest and Marbruk Brook to the southeast.[1] 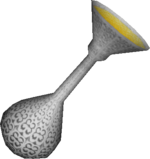 For countless centuries, Lillandril was known as the center of higher learning,[2] with the Illumination Academy and the College of Sapiarchs serving these purposes. Amidst the First and Second Eras, the cities of Summerset often engaged in a conflict with each other, eventually blossoming into full-scale warfare. Lillandril would often battle with Alinor from the south.[6] Sometime around 1E 470, a group of Altmer discovered a magical flask with the ability to absorb magic from wherever. With its potential power, the founders used it to perform various tasks for the barons of the province and keep the Bosmer in Valenwood in check. But they later disappeared and crash-landed in a coral reef on what is now Stros M'Kai.[7] The legend surrounding the bottle was embraced by its city of origin, Lillandril and it became its symbol.[8] When Mount Firesong erupted in the Systres archipelago in 1E 2484, people from Lillandril witnessed smoke from a distance and smelled brimstone.[9]

In 2E 582, the tension between the College of Sapiarchs and the Mages Guild had grown exponentially since they established themselves in the town. The Sapiarch, Haladan was murdered by a member of the Mages Guild, Emile Oncent, who confessed to the situation. But because of the nature surrounding his confession, a newcomer was tasked to uncover the truth and both Emile and Haladan's apparent relationship. The newcomer uncovered their hidden plot to cure the vampirism for their mutual friend, Norasea, but Haladan was killed by one of her feral friends. It is unknown whether their secret was exposed to the public and Emile was sparred, or if the information was kept hidden to honor the pair's secret and thereby sparing Norasea of an execution. Regardless, the situation had been resolved.[10][11]

During the Imperial Simulacrum in the late-Third Era, the city-state of Lillandril was an active settlement. It was ruled by King Corridalf and it had a rivalry with Alinor.[5] During that decade, the Eternal Champion traveled through the city-state on their quest to re-assemble the Staff of Chaos, after acquiring the fourth piece from Elsweyr. They ventured to the city's Mages Guild and spoke with their loremaster, Corim Ashlen on the location of the Crystal Tower, where the fifth piece was stored. The guildhall was previously attacked by the priesthood of the Mad God, who sought a diamond, which in turn revealed the tower's location. The champion was able to retrieve the artifact from the Temple of the Mad God and return it to Ashlen. Using the gem's power, the loremaster was able to scribe the location for the champion.[12] Ever since their victory over Jagar Tharn, many Imperial-loyalists re-traced the champion's steps through their journey, including Lillandril.[13]

For Altmer culture as a whole, see the: Culture section on the Altmer page.

The flask of Lillandril was a powerful artifact that has since been embraced by the city. And while scribes of Ancient Lillandril were the ones to discovered it, the flask is not of elven origin.[14] The wielders of the flask in the early First Era fled the southern provinces for Daggerfall and sought refuge with the Direnni, in fear that Wood Elf assassins would come and find them. The founders were killed and the flask was lost on Stros M'Kai,[7] later discovered by Cyrus the Restless in 2E 864.[15]

The Altmer have a common disinterest with the divine, Stendarr, who is known by many names, such as the Apologist of Man, but despite that, the Sect of Harmonious Master, mages from Lillandril, have dedicated their lives to work with Stendarr's light and adapt it into the School of Restoration. The order believes they are honor-bound to teach all races their spells, so long as they are willing to learn from it.[16] While other groups such as the Resolutes of Stendarr use the god's light to smite and defeat evil, others such as the Harmonious Masters or the Temple of Stendarr use it to heal.[17]

The name is also used for male Altmer, either directly using "Lillandril" or spelling it alternatively as "Lillandriil".[18] By the Fourth Era, Lillandril was a major port on the East Empire Company's southwest lines, between the cities of Dusk and Stros M'Kai.[19] The first iteration of the Aldmeri Dominion used an alloy called Lillandril Steel in the manufacturing of their longbows.[20]