The UESPWiki – Your source for The Elder Scrolls since 1995
< Legends: Story / The Fall of the Dark Brotherhood
Jump to: navigation, search

Kastus Thorn's House is a location in Wayrest. You enter the house to search for clues of the Dark Brotherhood and find the assassin Kastus Thorn living there. You can then choose to Confide or Kill the assassin. Depending on your choice, Kastus Thorn will start the battle with either Sparring or To the Death in play and be told that "Only you or the assassin can survive this fight. Damage dealt to each of you is doubled", or that you'll "Prove yourself to the assassin. In this sparring match, damage dealt to players is reduced." 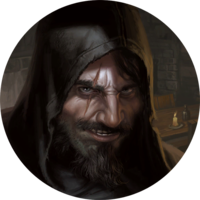 Pre-match
Kellen: As the hero searched the house, the assassin arrived home. The hero faced a choice: Confide in the assassin, or attempt to kill him, and complete his contract in his stead?

During the match
Kastus Thorn: You wish to join our brotherhood? Very well. Show me your skills.

After the match
Kastus Thorn: You fight well. Here. Take my contract. The target is Markam Hawksmire, the corrupt head of the Order of the Hour guard. He's likely at their barracks or the Temple of Akatosh.

After the match
Kellen: Searching the dead assassin's home revealed a contract: The target was Markam Hawksmire, the notoriously corrupt head of the local Order of the Hour guard. He was likely hiding at the order's barracks, or the Temple of Akatosh

The Sparring support slows down the game significantly, meaning that early aggression is not easy with smaller creatures. The opponent's larger creatures do allow board control; later-game threats can become overwhelming if allowed to persist.

The To The Death support speeds up the game significantly, meaning that early aggression is significantly more powerful with smaller creatures. The opponent's drain creatures allow large damage to be pushed while also healing dramatically, and what would be considered survivable damage like Lightning Bolt could be considered a serious threat. However, if the initial control is weathered and one is allowed to stabilize, then little damage will be pushed by the opponent.