The UESPWiki – Your source for The Elder Scrolls since 1995
< Legends: Story / The Fall of the Dark Brotherhood
Jump to: navigation, search 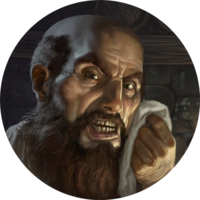 The Cloudy Dregs Inn is a location in the Wayrest map of The Fall of the Dark Brotherhood campaign. It is one of the first two locations during the Enter the Shadows episode, along with the Murder Scene. Uther sends you to the inn to see if anyone's seen anything suspicious. However, the barman doesn't take kindly to you and drags you into a bar fight.

Pre-match
Barman: You ask too many questions. I think it's time we taught you what we do to nosy people.

During the match
A barfight has broken out. Watch out for broken bottles!

After the match
Barman: All right, you win. There's a man who says 'Hail Sithis' when he's in his cups. He scared me more than you do - but not anymore. He lives on the East side of town.

An aggro style is difficult to pull off due to the opponent's guards in the early turns, but a control style is likely to suffer too much in the early game. As such, a midrange style is advisable for Cloudy Dregs Inn.

UESP has included a deck exemplar for this battle, effective in both normal and Master modes. The cards in the example deck have been chosen due to affordability and utility in the scenario. Its initial gameplan is to survive the opponent's early aggression without allowing the opponent to gain board control. Its prophecy count includes enough cards that prophecies should be expected; however it should not be counted upon. Silence effects should be held for times at which they're direly needed; they should not be the first response. Once the opponent is forced from the Liquid Courage Lane, it will move to the Shadow Lane. Without becoming too enamored of the Liquid Courage Lane, one should be ready to pivot to defending the Shadow Lane. At this stage in the game, the opponent's larger threats will be found there; be prepared to defend against this.