Witch covens in Daggerfall remain a mystery to many players. This article shows some carefully gathered information about them and explains their function and purpose.

Witches in the Iliac Bay have gathered in groups to perform their actions from ancient times. What these actions are in detail probably only a witch knows, but the fact is covens possess an exhaustive knowledge of ancient lore. Witches are therefore able to summon the various Daedra Princes, thus giving one the opportunity to find one of the lost artifacts of ancient power. It's also rumored that witch covens have a vast knowledge of herbalism and curing diseases, and even the Mages Guild is said to rely on their services from time to time. On the other hand, the guild and the various temples in the bay paint a rather dark and wicked picture of the activities performed by these covens. Whether these rumors are true or not, most people believe in them, thus covens are often confronted with distrust and suspicion. In any case the witches represent a power that must be acknowledged and getting on good terms with them may result in advantages probably not found anywhere else.

Covens are located in the wilderness of the Iliac Bay. They often consist of a big mound the size of a house, two guards at the entrance, with more witches and the leader of a coven, the beldam, inside. An example for such a coven is the Glenmoril Witches in Ilessan Hills.

To find a coven, a map with the location might be handy, though unnecessary if you know where to look. All you need to do is to know which square they are in (e.g., 2 squares north of CITY and 2 squares east of TEMPLE will put you there). These directions give you the closest starting location already visible on the map. Traveling nearby and exploring will make the coven appear on your map. When finding these covens, continually check your fast-travel map. Pay attention to exactly when the red line moves as you travel. Think of the location of each town, temple, cemetery, etc. as a "square". Moving in a direction (say north) you can travel within a "square" until you reach the northernmost border, at which time the red line will move one "square" north. When you hit the "I'm At" button, it will tell you whether you are in the square containing the coven or not. When you get near the coven (you probably won't see it beforehand since, compared to the overall area of a square, a coven is rather small) you'll get a message saying, for example, "Entering Coven on the Bluff" and a black dot will mark the coven on your map. From now on, you can just click this dot on the fast-travel map and it will take you right there.

A lone witch standing in a room can be found in a dungeon when embarking on an artifact quest from the knight order one is a member of.

Due to a bug in the BLOCKS.BSA file, the Glenmoril Witches faction ID has been assigned to a man who can occasionally be found in a random house. Because of this bug, interacting with him provides the witch interaction menu. For this reason, people will usually think they found an "in-house coven" and the man is a warlock. This bug is fairly common, as wrong faction ID assignments are frequent in the whole BLOCKS.BSA file (for example, many commoners have incorrect faction IDs, sometimes of a country (Wayrest, the Septim Empire), sometimes of some unique NPCs such as Br'itsa, Thaik or Lord Kain). As the Glenmoril Witches would be the only witches to have such "in-house covens", it is quite obvious this comes from the same wrong faction ID assignment bug.

Witch Covens and their Locations[edit]

There are fourteen Witch Covens in the Iliac Bay. All of their major gathering places can be found in the wilderness. 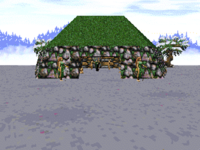 The Beldama Coven on a winter day 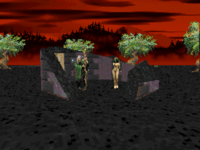 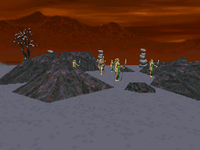 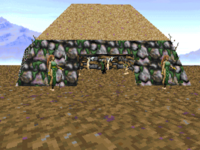 The Coven of the Dust

The Coven of the Dust 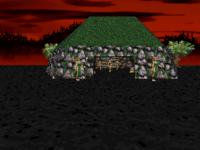 The Coven of the Peaks 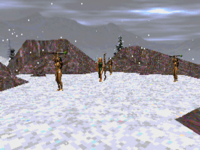 Coven of the Peaks on a winter day 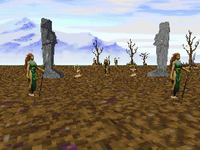 The Sisters of The Bluff[edit]

The Coven on The Bluff 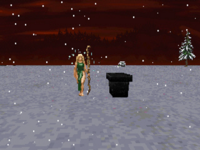 Coven on The Bluff on a winter morning 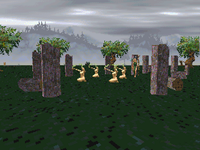 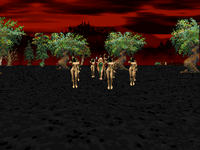 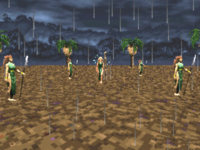 Coven of the Tide

The Coven of the Tide 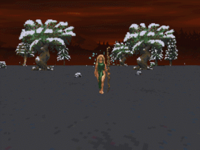 The Alcaire Coven on a winter morning 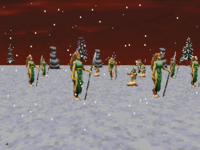 The Devilrock Coven on a winter morning

The Witches of the Marsh[edit] 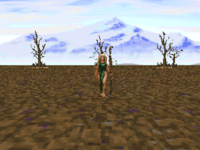 Coven in the Marsh

The Coven in the Marsh

As stated above, these are not real covens but are available due to a bug. They consist in a house inhabited by a man who has incorrectly been assigned the Glenmoril Witches faction id. Therefore he can summon Hircine and he offers the standard coven quests, upon completion of which you earn reputation with the Glenmoril Coven.

Location of the first Coven of Daggerfall City

Location of the second Coven of Daggerfall City

Location of the Coven at the City of Oxway

Location of the Coven at the Town of Eastwick

Location of the Coven at the Town of Longing

Location of the Coven at The Mouse and Jug Tavern

Location of the Coven at Gothway Garden

Location of the Coven at the Town of Midpath Hill

Location of the Coven at the City of Easttale

Even when one knows the approximate location of a coven it is still very hard to find it. Since the Iliac Bay has an enormous dimension, a small place like a coven can be considered as one grain of sand in a dune. To make it even easier to find a specific coven in this vast landscape without using a cheat, following table shows the exact coordinates of the Covens on the world map. In Daggerfall Unity you can use the "tdbg" console command to see your current coordinates.

Summoning daedra in a witch coven is slightly different than summoning in a Temple or a Mages Guild. Covens will only summon a random daedra, no matter what the summoning day is — useful if you just missed a summoning day for a daedra and don't want to wait for a whole year.

The Glenmoril Witches in Ilessan Hills summon Hircine - as does any coven in cities and the witch appearing during the artifact quest. Going to any of these covens on the numerous so-called "summoning days" will prove the only daedra the Glenmoril Coven will summon is Hircine, no matter whose day it is.

However, there is a slight possibility for Sheogorath to replace the daedra to summon, even with the Glenmoril Witches.

Unlike at guilds, a failed summoning will result in waves of daedric foes coming after you.

Cost of Summoning Daedra and Success[edit]

If you are running patch 2.12 or later and have cheats enabled (by adding cheatmode 1 to Z.CFG), press CTRL-F1 while not on the map screen. When you then go into the map screen, all the fast travel locations will be visible. Witches' Covens will show up as black dots—select "Dungeons" to make them easier to see. Not all provinces have covens. You can hit CTRL-F1 again to restore the map to only the destinations you have come across "naturally".