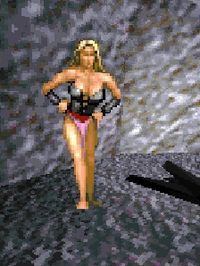 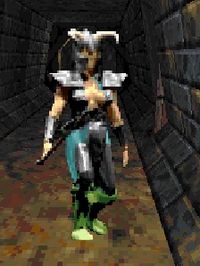 The guards will pursue their escaped prisoner relentlessly

Speak to a beldam, who says:

"Our sister (witch's name) has been in imprisoned. We need someone like thee to rescue her. Art thou willing?"

"If thou does this for us, we will be very grateful indeed. Give her these clothes to disguise her when you find her in (dungeon). We will expect both of you back here in (time limit) days if not sooner."

"Thou hast a heart of ice, (player's first name). For shame."

Head to the dungeon named by the beldam. Find the imprisoned witch and speak to her to give her the clothes. When she receives them she will say:

"(Witch coven) sent you? Praise (Daedra Prince)! I'll put on the (clothes) and we can slip out of here."

After freeing the witch, you must make your escape. However, as you do so you will hear her guards shout: "It's (witch's name), the prisoner! Stop! Witch!", "No more prison for you, (witch's name)! Straight to execution this time!", or simply "Halt! You're (witch's name)!"

The guards are warriors; they begin appearing as soon as the witch is free and begin pursuit. If they mange to catch you they will naturally try to kill both of you, so be prepared to defend yourself. Escort the witch back to the beldam after you escaped from the dungeon.

After seeing the rescued witch, the beldam says with delight:

"(Witch's name), it does my heart good to see thee here and well. (Player's first name), you have today earned the respect of (witch coven)."

If you rescue the witch, but fail to return to the beldam in time, she says:

"I think I can get back to (witch coven) from here," (witch's name) thanks you and goes on her way."

In any event, the beldam does not give you a reward for this quest.