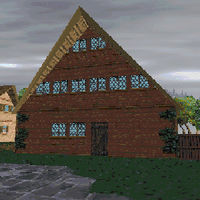 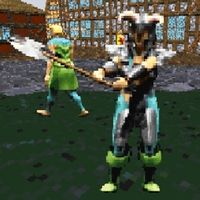 Unknown forces are committed to preventing the child's safe return

"The (witch coven) actually could use thy assistance in a most absurd and yet serious matter. Thou hast no illusions that the witches of (region) are despised. None trust us for long, for our power and solitude make us a difficult force to manipulate. We have discovered a trap that will soon be sprung on us, and we need someone like thee to disable it. Art thou interested in such a quest, in exchange for a (gem)?"

"Thou wilt? Take then this child, (child's name) (he/she) says (his/her) name is. We found (him/her) some days ago abandoned by (his/her) people. Clearly, (he/she) has been placed here so our enemies can prove that we are involved in -- what do you suppose? Human sacrifice? The corruption of innocents? Nothing so mundane as kidnapping I'd wager. (Child's name) tells us that (his/her) parents live at (residence) in (town). Lead the child back, but beware. Our fine enemies would rather murder the two of ye than allow the child to return home. Come back to us in (time limit) days or less and we'll have thy (gem) for thee. Good luck."

"Wilt thou not? (Oath), the (witch coven) is used to the cowardice of our allies."

As soon as the child is in your custody, you hear one of the following:

Besides this strange start, the quest is a pretty easy escort job. Just head to the town the child's parents live in, ask around town to locate their house, and drop the child off inside. The entrance door may be locked, so be prepared to pick the lock or have an Open spell handy. Beware, as you will be pursued by hostile warriors intent on killing both of you.

Take care of any resistance and get the child into the house. As you enter, the child will say:

Afterward, return to the Coven to collect your reward.

After returning to the Coven, the beldam tells you contentedly:

"It is good that (child's name) is home. Perhaps the kindness that the (witch coven) showed will dispel some of the myths of our iniquity for the next generation. Here is thy (gem). Thanks be to thee, (player's first name)."

If you rescue the child but fail to return before the time limit expires, the child leaves you, saying:

"I'll go the rest of the way myself," says the child, slipping away and disappearing with surprising agility.