The UESPWiki – Your source for The Elder Scrolls since 1995
< Daggerfall: Places
Jump to: navigation, search

Dungeons are an essential component of gameplay. Many quests require the player to enter a dungeon and find a quest object within; this can be an item, monster, or NPC. If the player's objective is to kill the quest object, then this must be done as well.

At the start of the game, only Common Cemeteries and Privateer's Hold are known to the player's character and visible on the fast travel map; all others must be discovered.

The player can discover new dungeon locations in one of three ways:

The process of finding a quest object in a dungeon is called dungeon crawling, since the location of a quest object is determined randomly and, in most cases, it is necessary to thoroughly search the dungeon step-by-step. The only exceptions are objects in Main Quest dungeons, these quest items are statically defined and therefore always found in the same locations within their dungeons.

Dungeon interiors consist of one or more blocks defined in BLOCKS.BSA and referenced (per-dungeon) in MAPS.BSA, which are glued together to create the appropriate scene. Dungeons may have up to (and including) 32 of these blocks, some of which have two passages connecting to other blocks in each of the four cardinal directions, hence the mating octopi term.

The dungeon's entrance/exit as it is shown within a dungeon. 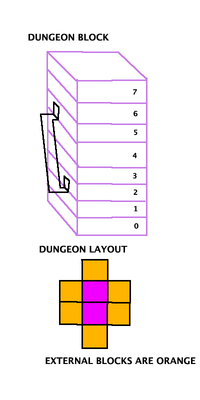 Schematic of a dungeon consisting of two internal blocks (purple) and border blocks in orange.

As stated above, a dungeon consists of up to 32 blocks: some of these (the ones located in the center of the dungeon) are connected to all four cardinally adjacent blocks, since there are two connecting passages in each of the four cardinal directions, and thus there are eight paths leading out of each of these blocks. While most dungeons appear to be a random conglomerate of different modules, they were hard-coded in the release media and thus are never-changing. These were most likely generated via a pseudo-random program of some type, but Main Quest dungeons are an exception, because these were all hand-crafted.

While Main Quest dungeons may be the biggest dungeons in the game, it has been commented by some that even the least of the random dungeons are logically too large for the majority of quests. It has also been voiced that because the number of blocks in the source material is limited, most dungeons lack diversity/variance, and hence all dungeons tend to look like each other.

Dungeons are built from blocks by assembling them together side-by-side on a 2D grid. There are two types of blocks: internal and border.

Because Main Quest Dungeons are hand-crafted, the location of quest objects is always the same; hence, it is possible to follow a guide on how to find them.

The remaining dungeons pose a more difficult challenge since the location of quest objects is determined randomly from the dungeon's list of quest locations, which vary depending on the dimensions of the dungeon and the modules used. One or more treasure piles can be found at every quest location, and the quest object will also be at one of these spots.

Knowing this, the only way to find a quest object is to search the dungeon step by step. This process is called Dungeon Crawling. The spot where a quest object is located will remain the same until the quest is over, so repeatedly exiting and re-entering a dungeon will not alter this location but will respawn all other monsters and treasure piles.

The quest locations of a certain dungeon module are always the same, so if the player has explored a lot of dungeons during their adventures, they may remember where these locations are, thus making the exploration slightly easier. The player can also use a Cheat to cycle through the various quest locations of a dungeon.

Standard dungeon automap display, 2D map circled. The position of the player is shown within this layout as a red dot and the exit as a blue dot (not visible in the screenshot because the red dot overlaps with the blue dot).

Two types of dungeon maps are available within a dungeon. The dungeon overview map (2D) gives an approximate two-dimensional overview of the dungeon's layout, with the player's location shown as a red square. The more detailed map (3D) displays the player's location as a red arrow and shows details of the explored areas (e.g., corridors and rooms) as they are seen through the character's eyes, complete with all textures and other details. As the player explores the larger dungeons, the detailed map may become increasingly confusing, but the player can click on an area of the map to disable display of that area. When the player leaves a dungeon, all map information is lost; the map is reset to its initial, unexplored state.

Upon nearing a dungeon location or when the player exits a dungeon, they will see these possible messages which indicate the type of dungeon it is.

Note: These messages are only displayed for 2-3 seconds, making them difficult to read.

The majority of each of the models defined in BLOCKS.BSA appears to be defined in four variations: one flooded (denoted by W in the source material) and three dry (denoted N in the source material). One model (the double moats) has only two (flooded) variations because the moats are never dry. Three models (the stone arch bridge grotto, the tower of crossroads, and the checker board cellar room) never flood; they have only the usual three dry variations.

The gaps in sequence for the specials are perfectly normal. There are no special settings left unaccounted.

The specials usually provide a unique setting for the dungeon entrance and for the location of a quest object inside the dungeon. The rest of the interior is drawn from stock pieces in b*.rdb, n*.rdb, and w*.rdb. A couple, Privateer's Hold, Scourg Burrow and Shedungent, rework common settings with different treasure drops/foes.