The UESPWiki – Your source for The Elder Scrolls since 1995
< Daggerfall: Places: Regions
Jump to: navigation, search

Cybiades is an uninhabited island off the northern coast of Sentinel, roughly southwest of Tigonus, within the Iliac Bay. The island is seemingly devoid of civilization. The dominant vampire bloodline of the region is Selenu. The only location on this island is a dungeon named Ruins of Cosh Hall, which is a Human Stronghold. 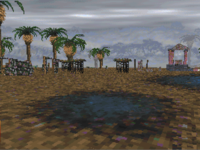 Exterior area of the Ruins of Cosh Hall

The only place on this island is the dungeon Ruins of Cosh Hall. It is a human stronghold, so you're most likely to encounter human type enemies, with the possibility of vampires on higher levels. Be wary when roaming through, since there are many spell casters inside the dungeon that can deal quite a bit of damage. 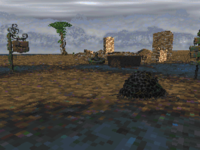 Without the use of a cheat it may be very difficult to find. Since there are no settlements on Cybiades, there are no guild halls, so this location will not be unlocked as part of a quest. The best way to find it is to travel to the northeast portion of the map (see map above). The world map will show you to be above water when in fact you'll still be on solid ground. The dungeon is located in this area. 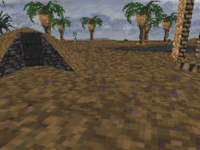 Although the island is uninhabited it possesses an entire political structure.

This article, which is part of the Daggerfall Redesign Project, is a stub. You can help by expanding it.
Retrieved from "https://en.uesp.net/w/index.php?title=Daggerfall:Cybiades&oldid=2663263"
Categories:
Hidden categories: