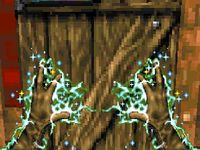 Casting an Open spell requires the use of the Mysticism skill

Skills govern almost every action you can perform. The score for a skill measures your proficiency in that field; a character who is adept at a particular skill has a higher value in it than a novice.

The application of a skill is either passive or active, with the majority of invocations as the active type. This means the character is undertaking some action, rather than just letting things happen. An example of an active skill invocation would be the Jumping skill. The character's skill is only applied when the player issues the correct command. Passive skills, on the other hand, are invoked by the Daggerfall game engine itself on the player's behalf. Medical is a prime example of a passive skill, because it is invoked each time the character rests, on the character's behalf by the computer, even if the player's intention was to idle for several hours. Language skills are another example. Whenever one comes within range of a creature of the appropriate type, the language skill is automatically checked. If successful, the creature is rendered non-hostile.

An action is resolved as a success or a failure by evaluating the governing skill with some random chance. The score of a skill is proportional to the probability of success in that action if given "average" circumstances. Naturally some circumstances may be more difficult than others, and the skill evaluation process considers any applicable bonuses or penalties, but for the most part one may consider a skill's score as a success probability expressed as a percentile.

Usually, you can only master one skill to 100%, with all others capped to a natural maximum of 95% (their values can still be increased by enchanted items, however). This can be circumvented by enchanting an item to boost your mastered skill beyond 100%, which will remove the limit. However, this exploit is not possible in Daggerfall Unity.