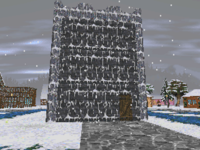 The Fighters Guild is one of the joinable factions in Daggerfall. They are a sophisticated mercenary service, often hired out as guards, escorts, and, occasionally, on more covert missions. The Guild is where everyone with any gold goes to for hired muscle.

In the Iliac Bay, the Fighters Guild is often essential for getting things done, leading to a range of possible assignments for guild members. Some quests involve killing creatures that have made their way into houses, killing giants or harpies, and protecting people. This is also the only guild that has a non-random quest, one of the "Lord K'avar" quest series, infamous for spawning seemingly unending waves of assassins. 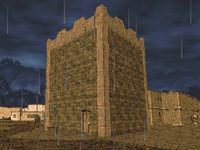 A Fighter Trainers guildhall in Myrkwasa

The Fighters Guild operates out of guildhalls in many towns across the Iliac Bay region. Guildhalls in all regions are identical in structure and interior layout, with the only difference being the color scheme (Hammerfell being beige colored, and High Rock being stone colored). Every guildhall has the same services and opening hours, regardless of which town or region it's located in.

Your guild rank is determined by a combination of your reputation with the Fighters Guild and your two highest skills associated with the Guild:

Advancing in rank within the Fighters Guild affords the following advantages: 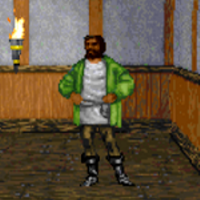 A Quester of the Fighters Guild

Fighter Questers are the individuals at Fighters Guild guildhalls who offer quests and dispense the associated rewards. Each Fighter Quester potentially offers a wide array of quests for guild members, and a limited number for non-members. 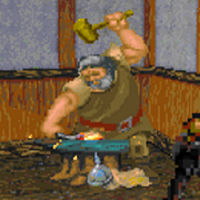 An Equipper of the Fighters Guild

The Fighter Equippers will repair and mend unenchanted arms and armor for any member of the Fighters Guild. The costs for a repair depend primarily on your rank within the guild, though your reputation with the faction will also affect the price of their services.

Repair times when utilizing these services can take one or more days, depending on how worn the item is and how many items the Equipper is already repairing. At regular Fighters Guild guildhalls, they can only repair one item at a time. This is a serious drawback compared to Armorers, General Stores, or Weapon Smiths. They also hand repaired equipment over only during the regular opening hours (11:00-23:00), regardless of your rank within the guild.

However, the Fighter Equippers at Fighter Trainers guildhalls can repair as many items at a time as Armorers, General Stores, or Weapon Smiths. Since these guildhalls never close, pickup times are similarly not an issue. 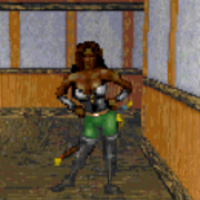 A Trainer of the Fighters Guild

Fighter Trainers are found in every Fighters Guild guildhall. They are the guildmembers who offer training services in any skill associated with the Guild. The cost of this service is dependent on your character level, 100 gold per level to be precise. As with all skill training, Fighter Trainers can only train a skill up to a maximum of 50%.

Because the cost of a training session depends entirely on your character level, your reputation with the Fighter Trainers will not affect the price of their services.

The following quests are offered by Fighter Questers:

Note: the Fighters Guild uses rank only and not level to determine which quests may be offered.