Darkshade Caverns I is a group dungeon found in southeastern Deshaan. 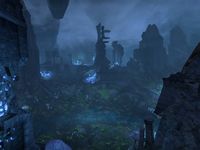 As Deshaan's largest kwama mine, the caverns' ownership remains hotly contested. The caverns also contain the hidden Dwemer ruin of Rkugamz. In the normal version, Tervur Sadri wants you to help him reclaim his mine from the thugs within.

The following item sets will drop both Darkshade Caverns I and II: Armor of Truth, Netch's Touch, and Strength of the Automaton.

A Dunmer-style chest can spawn between two tents in the campsite to the left of the entrance tunnel in the first chamber.

A chest can spawn west of the Hive Lord, on a ledge overlooking the valley where Darkshade Alits, Strangler Vines and the Cavern Patriarch reside.

A heavy sack can spawn on the east side of the Sentinel of Rkugamz's arena, between two patches of glowstalks. A chest can spawn in the corner south of that heavy sack, in the middle of a glowstalk patch. When you approach the Sentinel of Rkugamz, you'll see Tervur Sadri attempting to open the door behind the construct. When you get close enough, he'll fruitlessly attack you. A chest can spawn west of the locked entrance to Rkugamz. A heavy sack can spawn to the left of the door, among some rocks and rubble.