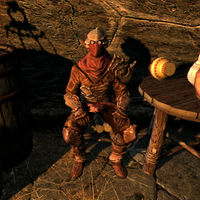 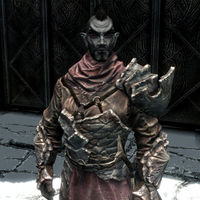 Teldryn Sero without his chitin helmet

Teldryn Sero, a Dunmer Spellsword, is a mercenary found in the Retching Netch. He can be hired as a follower for 500 gold.

He wears a full set of light chitin armor, including the cuirass, boots, bracers, and helmet. He carries an elven sword and an elven dagger.

He grew up in Blacklight in Morrowind. He claims he once met Saint Jiub, making him over 200 years old. At some point he moved to Windhelm's Gray Quarter before eventually moving to Raven Rock. According to him, his chitin armor was especially made for him by Grendis Rolovo, one of the finest master armor smiths in Morrowind.

When you first meet him, he may greet you with one of the following lines:

If you have dismissed him and approach him again, he'll greet you with, "I was enjoying our travels together before we parted company. I'd be happy to rejoin you for no charge... if you're interested." If you choose to rehire him, it will be free and he will tell you, "Lead the way."

While Teldryn is your active follower, you can ask him how he ended up on Solstheim. He'll explain, "Long story, but I don't see the harm in sharing it with you. My last patron was a true Nord. He was dressed in animal skins, had tattoos on his face... a real traditional type, if you know what I mean. He had an insatiable bloodlust and was extremely stubborn... one of the toughest employers I've ever had." If you ask why he continued to work for the man, he'll answer, "Simple... he paid well. Very well. Anyway, we'd just cleared a ruined fort somewhere outside of Whiterun and when we got outside, we saw one of them galloping away on horseback. Well, my boss wasn't about to let him get away, so we pursued... on foot, for three days." If you ask him to elaborate, he will continue, "Until we ended up tracking him to one of the largest bandit encampments I'd ever seen. My patron took one look at me, and made the most menacing grin I'd ever seen. At that moment, I knew I'd never see him again. No amount of money would ever be worth that kind of death."