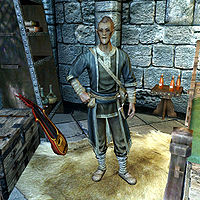 Enthir is a Bosmer sorcerer living on the second floor of the Hall of Attainment, in the College of Winterhold. When meeting him for the first time, he claims to be able to obtain "hard to find" items, and instructs you to meet him in his quarters to conduct business discreetly. He occasionally travels to the Frozen Hearth inn in Winterhold.

Enthir sells mainly mage equipment and supplies, such as staves, robes, scrolls, ingredients, spell books, and soul gems. He does sell some rare items, such as daedra hearts and black soul gems. He will buy any type of item. He wears expert robes of illusion and a pair of boots. He also carries an iron dagger.

In the Saints & Seducers Creation, it is revealed that he was hired by the manic mage Thoron to conduct experients with the Atronach Forge and discovered the secrets to bind Golden Saints and Dark Seducers.

This is the merchandise found in Enthir's merchant chest. These items are only available if purchased from the merchant; they cannot be pickpocketed or stolen. They are restocked every two days.

Game data has lines recorded for Enthir's conversations with other College members, but they cannot be encountered normally due to a bug. He was supposed to talk with Arniel Gane about his project:

Arniel: "Err, excuse me Enthir. Might I have a moment?"
Enthir: "What is it?"
Arniel: "Yes, err, apologies for the intrusion. I was wondering, err, if you could possibly, ah, procure a few select items for me."
Enthir: "Really, Arniel? Because I seem to recall doing just that for you recently, at which point you assured me that you'd cover my expenses. And that, my nervous little friend, has not happened. Would you care to comment on that, perhaps?"
Arniel: "Ahh, hmm. Yes. I, err, I was unaware that I had forgotten that. I will, err, I mean I'll take care of that as soon as possible."
Enthir: "See that you do."

Enthir: "So, Arniel. How's that little project of yours coming along? Any progress worth mentioning?"
Arniel: "Oh, that. Err, yes. It's... It's quite promising, I believe. Definitely on the right track. Results, err, results should be soon."
Enthir: "Right. And what did you say the point of this little venture was?"
Arniel: "Oh, no. Err, wouldn't do to say at all. Not, err, not now. Not at all. I have far too many things to do still."
Enthir: "If you say so."

Enthir also appears to show interest in the return of the dragons, as shown in his bugged conversations with other College members:

Enthir: "You haven't heard any more about dragon sightings, have you?"
Arniel: "No, which is fine with me."
Enthir: "A pity. You have any idea how much fangs would be worth? Or even better -- bottle their flame. The right buyer would pay an immense amount."
Arniel: "Bottle... their flame? I can't... No, I don't think I've any interest in that sort of thing."

Enthir: "Is it true? Are there really dragons in Skyrim?"
Faralda: "There's talk of it, but I find it hard to believe."
Enthir: "I do hope it's true. So many opportunities..."
Faralda: "Opportunities for what?"
Enthir: "What? Oh, nothing. It's just... It's an interesting development."

Player: "So they were like your kind?"
Enthir: "Like the Altmer? Yes, I would say their culture quite possibly rivaled our own."