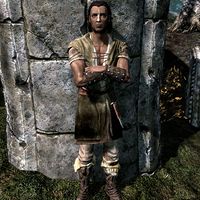 Banning is a Breton ranger who lives with Cedran at the Markarth Stables selling war dogs. A dog named Vigilance can be bought from him for 500 gold. You can make a delivery to Voada on his behalf. He is also one of the guests of The Taste of Death.

He wears farm clothes with hide boots. He also carries around an iron dagger, some small change, and the key to the Markarth Stables. He wakes up at 6am to have breakfast. At 8am, he heads outside to tend to his dogs outside for a long twelve hours, skipping dinner due to an oversight (see bugs). He can be found inside the stables at any other time, going to bed at midnight. Banning also knows the spell Conjure Familiar.

If you aren't on another delivery:

How long have you been training dogs?
"My family has been doing it for years. You need one out in the Reach. Don't want to be alone when some Forsworn comes swinging. I personally trained a whole litter for the Jarl. That reminds me, I was going to deliver some dog food to the Keep. Spiced beef. Their favorite."

You can then accept or decline to help:

I could deliver that for you.

"Well, look at you, thanks. Take it to Voada, she handles all the dogs for the Jarl."

The Taste of Death[edit]

Banning is found sitting at the dinner table. If you talk to him, he'll greet you with:

"I remember my first feast. I envy you."
Wait, I know you.
"You buy a war dog from me? There's a reason why my hounds are so eager to bite into people."

If you've delivered his spiced beef before, he'll recognize you as well:

"Ah, yes. The courier. I guess you know my secret ingredient for that spiced beef, now."

If you've completed the feast successfully, he may be found greeting you subsequently with:

"You were given Namira's ring? A great honor."

He'll greet you by advertizing his dogs:

"Need a trained war dog? Fiercest companion money can buy."
"A war dog is good company and good protection."
"I like the loyalty of a dog. Not as fickle as a wolf."
"You have to train a good war dog from a pup. Bite your arm clean off otherwise."

If you have done the Taste of Death he will greet you with:

"I can smell the blood. Good and sour."

You can then ask him about the feast:

You were at Namira's feast, weren't you?
"Better if we don't talk about that. As far as anyone's concerned, we all had dinner at a nice inn along the road, and nothing strange happened."

If Cedran has come to pass, Banning will take over the stables and gain the ability to sell you a horse:

"I'll be handling the horses with Cedran gone. Miss that old man."

What can you tell me about Markarth?
"Don't fall."

I'll take that dog off your hands.
"Good. Here you are. He'll follow you to Oblivion and back, if it comes to that."

When you try to buy one when you've already got a pet follower, he'll refuse your purchase:

"Sorry. You already have an animal with you."

Similar to when you don't have enough gold:

"War dogs cost gold, friend. Come back when you have some." 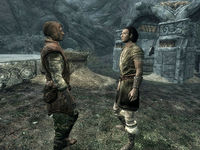 "How are the new breeds getting along with my dogs?" 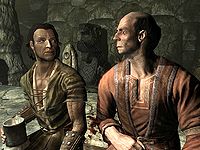 "When was your first meal, Banning?"

He can occasionally be found talking with Cedran concerning their business:

Cedran: "Think we should buy more horses next season?"
Banning: "I'd rather spend the gold on a new litter of pups, but the horses bring in more gold."

Banning: "How are the new breeds getting along with my dogs?"
Cedran: "Haven't attacked each other yet. Good a sign as any."

He will also randomly engage in conversation with hostess Eola and fellow Markarth citizens Hogni Red-Arm and Lisbet:

Eola: "Not too full on bread and wine, I hope?"
Banning: "I always leave room for the main course, Eola."

Hogni: "When was your first meal, Banning?"
Banning: "Do dogs count?"
Hogni: "Of course they don't count!"
Banning: "My friend Marex. We were hunting, and I thought he was an elk."
Hogni: "That must have been quite a surprise."
Banning: "Either way, I came back with meat for the table."

Lisbet: "It's so good to have everyone around the table again."
Banning: "Eola is a fine host. She really keeps the faithful together."
Lisbet: "I'm just glad we had this, now. I was almost getting ready to eat my servant and blame it on the Forsworn."