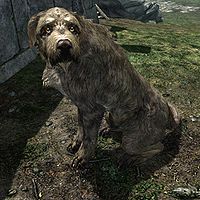 Dogs are found throughout Skyrim. A dog will attack you if it is owned by a hostile NPC. You can occasionally find stray dogs in the wild that can be provoked into attacking you. HuskiesDG and Death HoundsDG are generally found accompanying NPCs, although Death Hounds only ally themselves with vampires.

Certain dogs can also be recruited as potential followers throughout the game. You can have at most one canine follower at any time. If your dog is left waiting for too long, a message will appear stating that it has grown tired of waiting and will start walking to its original location.