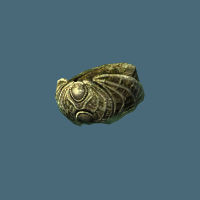 The Ring of Namira is a Daedric Artifact given to you by Namira as a reward for completing The Taste of Death. When equipped, the ring grants a Fortify Stamina effect which boosts the bearer's stamina by fifty points. As an added bonus, the ring also grants its wearer the ability to eat the corpses of humanoid enemies which are one of the playable races. If the wearer consumes a corpse, a blessing will grant an additional 50 points of health and 50% health regeneration for five minutes, lasting even after the ring is unequipped. This may provoke comments from guards such as "Ugh. Your breath is foul. What've you been eating?" Feeding on a body, if witnessed, constitutes an assault, and doing so in front of a guard may prompt them to attack you.

The Ring of Namira becomes much more useful with Survival ModeCC enabled, as it allows you to easily reduce your hunger by feeding on dead NPCs.