The UESPWiki – Your source for The Elder Scrolls since 1995
< Online: Places: Wrothgar / Elven Ruins / Delves
Jump to: navigation, search

This complex cave was clearly built by Ayleids, the ancient Wild Elves of Cyrodiil. After St. Alessia's slave revolt, some Ayleid clans fled to northwest Tamriel, but whatever group excavated these halls disappeared long ago. 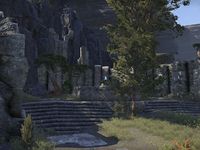 Thukhozod's Sanctum is an Ayleid ruin in western Wrothgar. It is inhabited by various skeletal enemies, zombies and bone colossi. A powerful necromancer resides deep inside the ruin. The notes Letter from Thukhozod and Gorlar's Journal, Part One and Part Two can be found here, and the book, The Legend of Thukhozod can be found here too.

This Online-related article is a stub. You can help by expanding it.
Retrieved from "https://en.uesp.net/w/index.php?title=Online:Thukhozod%27s_Sanctum&oldid=2164234"
Categories:
Hidden categories: