The UESPWiki – Your source for The Elder Scrolls since 1995
< Online: Quests: Wrothgar / Side Quests
Jump to: navigation, search

The vile sorcerer, Gorlar the Dark, continues to terrorize the people of Wrothgar. He has raised countless Orcs as undead thralls and trapped their spirits in Mundus. I must set their spirits free and put this necromancer to the sword. 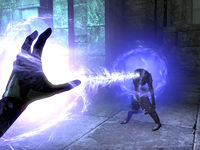 Free the undead by using Phial of Tranquility

A priest named Thazeg has petitioned the Dragonstar Caravan Company to send a mercenary to Thukhozod's Sanctum. A necromancer named Gorlar the Dark has been terrorizing Wrothgar, and Thazeg is concerned for about the afterlife of Gorlar's undead slaves. Your task is to enter the Ayleid ruin, weaken six undead abominations, and use the Phial of Tranquility that Thazeg has provided you to free them from their accursed existence. You should also kill the necromancer while you're there.

Gorlar the Dark can be found in the back of the delve. As for the undead, there are plenty of zombies and skeletons for you to liberate. Don't kill them for this. You need to weaken them to about half health, then use the Phial on them to set their spirits free. You need to do this six times. When you're done, return to Thazeg in Morkul Stronghold. He can be found in the inn's eastern wing, praying.