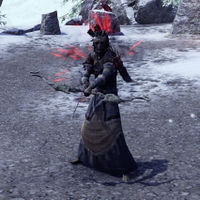 Sister Ambritt is a member of the Icereach Coven and is responsible for summoning the Harrowstorm which devastated the nearby Kilkreath Temple.

She fights using a bow and with her hounds. Ambritt also has some talent with frost magic.

Quick Shot
Basic ranged attack.
Arrow Spray
Cone Attack [verification needed — could be frost variant]
Summon Death Hounds
If her initial hounds have been killed and enough time has passed, she will blow a horn and summon another pair of Death Hounds.
Freezing Leap
Similar to the Divine Leap, Sister Ambritt will leap into the air and land with heavy force. However, the AoE attack causes frost damage. When the red circle appears you are able to dodge out of range.

After you have investigated the Kilkreath Temple with Fennorian who joined you midway, Lyris Titanborn will arrive. After a tense moment between the vampire and the warrior, Lyris will tell you she found the culprit of the ritual at the temple. Follow the path to some small nordic ruins and Sister Ambritt will appear on top of the hawk arch and will comment on your apparent survival.

Sister Ambritt: "Not even harrowed? It seems the ritual needs refinement."
<She teleports to the ground and summons two Death Hounds which flank her.>
Lyris Titanborn: "Kill her before she can summon another storm!"

When you engage in combat, Lyris will assist. Sister Ambritt will be gleeful for new bodies:

Sister Ambritt: "Willing sacrifices? How nice!"
Lyris Titanborn: "Sacrifice? I'd rather give you my axe, witch!"

After Sister Ambritt dies, Fennorian will arrive. He will be slightly annoyed that you couldn't keep her alive for questioning:

Fennorian: "I hoped you could take her prisoner. No matter, I found something. This way!"
Lyris Titanborn: "Go with your vampire friend. I'm going to look around here."