This article is about the enemy. For the set, see Maarselok (set). 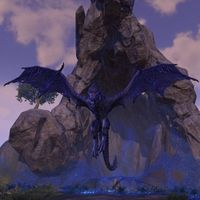 Maarselok is a Dragon located in Lair of Maarselok. His influence corrupts the Green, as he is imbued with a mysterious disease known as the Azure Blight. Maarselok seeks to corrupt Selene, a Changeling with close ties to Shagrath, so that he could shape the world to his liking with her powers.

For centuries, Maarselok slept deep in the mountains between Elsweyr and Grahtwood. However, upon the opening of the Halls of Colossus, this monstrous Dragon has awoken as a consequence of the release of his brethren.[1] Hungry and vengeful, Maarselok has ravaged the wilds and now threatens to spread his corruption into the domain of Valenwood, risking the infection of the Elden Tree if left unchecked.[2] 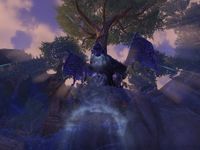 Unrelenting Force
Maarselok with target one player with Unrelenting Force. An alert will pop up on screen and whoever is targeted will see yellow lines coming off of them, similar to the ones seen when an enemy NPC is charging up a heavy attack that must be blocked. You must block Unrelenting Force unless you want to be knocked back.
Summon Stranglers
Maarselok will summon Azureblight Stranglers to spit poison at Selene's spiders as they climb up the blighted vines to reach Maarselok. The stranglers must be killed so the spiders can "convince" Maarselok to come down so the group can damage him. Once he flies down, he will be shrouded in a green aura and stunned for a while. This gives your group the opportunity to damage him, and he will not fight back in his daze. Eventually, he will snap out of it and fly back up to a perch.
Summon Adds
The rest of the adds that appear during the fight will attempt to distract Selene. They need to be killed so Selene can focus on summoning spiders to bring Maarselok down.

Summon Wyrm
Summons an Azureblight Wyrm
Charge
Maarselok rushes forward.
Scourge Seed
Maarselok infects one player with the Azureblight. This is indicated by an audio cue. Selene will set down a green rune on one of the stone circles on the ground. When she reveals the infected party member, they will glow blue. That person needs to run over to her ward and cleanse the blight with the synergy.

When you encounter Maarselok for the first time:

Allanwen: "Look! Maarselok!"
Warlock Carindon: "Another rare specimen."
Selene: "Is there nothing you won't objectify?"
Warlock Carindon: "Taking you apart has taught me how to put you back together. You'll be grateful for that as the Dragon's blight rots you from within."
Allanwen: "Save it for the Dragon! Keep moving."
Maarselok: "Ah, she's awake. I wondered how long it would take before you showed yourself, Changeling. Shall we dance?"
Selene: "Maarselok! You'll pay for defiling this place!"
Selene: "Unbind me, warlock!"
Maarselok: "And you've brought an audience! How fun!"
Selene: "Kill this abomination and I'll choke Maarselok on his own corruption!"

Selene will use her power during the fight.

Selene: "The wild is mine to control, Dragon!"
Maarselok: "Are you holding back? I'm beginning to think you're not trying."

Selene: "I'll purge you from this valley!"
Maarselok: "Again! Again! You've still got fight in you."

Selene: "Taste your own rot!"
Maarselok: "I feel like you aren't giving this a chance, Selene."

Selene: "You won't be laughing when you're in my web!"
Maarselok: "Are you enjoying yourself, Changeling? I am."

After defeating his Azureblight Lurcher, he flies off.

Maarselok: "I'd forgotten how thrilling cavorting with your kind can be! I hope you can keep up!"
Allanwen: "He's playing with us!"

Maarselok: "There you are, my pet. I feared you lost interest."
Selene: "I am no one's pet!"
Maarselok: "No, you're the Elf's plaything. But you could be so much more."
Selene: "You'll pay dearly for all of this, Dragon!"
Allanwen: "Go. Protect Selene! We'll give her everything we have!"
Maarselok: "We don't have to be enemies, Selene. I am in need of a priestess."

After defeating him the second time: 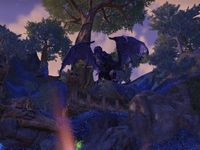 Maarselok on his perch 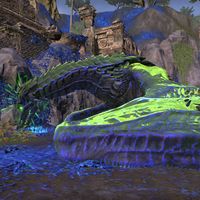 Maarselok brought down by Selene

When Maarselok flies down:

After fighting off Maarselok: 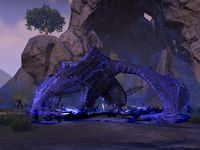 Maarselok at the summit of his lair

When selecting a player to be the Azureblight Host:

If a player doesn't purify the seed in time, causing the Azureblight Wyrm to spawn: [verification needed — do they actually spawn?]

Veteran Hard Mode has unique dialogue if you activate it:

Azureblight Seed: "<This Azureblight seed resembles those you've seen in your ascent through the corruption, except this one has writhing roots sprouting from its cracked shell. Like it's trying to plant itself in the fetid soil.>"
<Try to smash the seed.>

The seed will then spread the corruption to Selene, making her a Thrall to Maarselok, throughout the fight, she and Maarselok will say:

Selene:Join us in the azure world!"
Selene:I'll claim you all for Maarselok!"
Selene:Taste the blight!"
Selene:Ah, free! For now. …"
Maarselok:What a splendid display of excretion."
Maarselok:I bless you, from the bottom of your heart."
Selene:Kill him! Before he takes me again!"
Maarselok:You can only fight it for so long."
Selene:Alive or dead, you will become one with Maarselok!"
Maarselok:I've sown the seeds of victory among you, but where?"
Maarselok:Oh, you'll make fertile ground!"
Selene:I can't resist him for long! Hurry!"
Maarselok:My dear priestess, I am not finished with you."
Maarselok:Can you feel the seed taking root?"
Selene:I'm not free of the blight yet. We have to kill him!"

If your group gets wiped [verification needed — is this true?], Maarselok will say:

"You can only fight it for so long."
"Selene, you're spoiling the fun!"
"What a splendid display of excretion."
"Ah, I forgot to bury you. You'll sprout yet, my flower."

This Online-related article is a stub. You can help by expanding it.
Retrieved from "https://en.uesp.net/w/index.php?title=Online:Maarselok&oldid=2101762"
Categories:
Hidden categories: