I met a couple of Wood Elves who want to enlist a mage's and a nature spirit's help to kill a Dragon that threatens Elden Root.

"It's a moot point. We just need to convince her that the Dragon is a greater enemy than Carindon."

When you arrive in the Tenmar Mountains, you will find two Bosmer—Allanwen and Gadnalon—in discussion with the Altmer Warlock Carindon as they look down at dead spider which seems to be covered in an azure blue substance.

Allanwen: "Oh, agh. The Dragon's corruption has spread farther, Carindon. Closer to you and Selene."
Warlock Carindon: "Yes, this is … unfortunate. I will do what I can. But, Selene? She is difficult to persuade, at best."
Gadnalon: "Selene might've been less difficult if you hadn't chosen to make her the subject of your research."
Allanwen: "It's a moot point. We just need to convince her that the Dragon is a greater enemy than Carindon."

Speak with Allanwen to see what is going on, it is a complicated situation. After hearing reports of a dragon roosting in the Tenmar Mountains, it was found that the dragon Maarselok was also spreading some sort of corruption which was steadily moving towards the Valenwood. After petitioning King Camoran Aeradan, Allanwen sought out the spirit Selene to get her aid to cleanse the corruption. However, there was an obstacle to this in the form of Warlock Carindon. In past years he found Selene's lair and captured her soul for experiments, and is reluctant to relinquish his hold on her. Furthermore Selene willingly working with Carindon is tenuous at best.

Nonetheless, appealing to the Warlock's sense of preservation has worked and is amendable to Allanwen's plan. But first the group needs to clear the way to Carindon's Study and Selene with the old Khajiiti ruins of Magrus's Ascent. In the first map, you will need to fight your way up the mountain path to the ruins. There should be no major difficulties as your enemies are mostly the native wildlife of the Tenmar Mountains, Bears, Senche-Lionesses and Spiders. Once inside the ruins, the Mer trio will catch up as you continue to clear a path. As you get further into the ruins, you will soon find the ground, plants and stonework covered in a bright blue growth. This is also where you will have your first encounter with Azureblight Infected creatures.

Eventually you will reach the door to Carindon's Study where the disembodied soul of Selene is waiting. Once Selene notices the group, Allanwen will attempt to convince her to help.

Selene: "I see you've brought more torturers to dissect me, warlock."
Allanwen: "Z'en's bargain, we're not torturers! I've come to restore the balance here."
Selene: "Am I to understand you're a follower of Z'en? Return my freedom and I will right the wrongs done here."
Allanwen: "Unbind her, Carindon."
Warlock Carindon: "Unwise. I shall loosen my hold only."
<Carindon uses his magic and loosens the bindings.>
Selene: "Now for payment in kind. It's my turn to study your insides, warlock!"
Warlock Carindon: "Gah! I warned you of her duplicity!"
Allanwen: "Selene! No! Don't let her kill Carindon! We need them both!"
Selene: "Stay out of this! Carindon must pay!"

With an enraged Selene ready to kill Carindon, you will need fight off Selene to proceed. In this fight, Selene will summon Selene's Claws and Selene's Fangs to fight with her. These are a giant green spectral bear and spider respectively. While either of these are active, Selene will be invulnerable to damage so they need to be taken care of quickly. During this, she will also release Poison Wave which is a green poisonous mist that can be stopped by interrupting her. Once you have beaten her down, Selene will relent and Gadnalon will step in to convince Carindon and Selene that Maarselok is the bigger threat. At this, Selene will use the two Bosmer as her connection to the Green and you can leave the room to continue searching for Maarselok.

Eventually you will encounter Maarselok for the first time as he flies around. He will be quite interested in Selene once he sees her, practically ignoring everyone else outside being an audience.

Maarselok: "Ah, she's awake. I wondered how long it would take before you showed yourself, Changeling. Shall we dance?"
<An Azureblight Lurcher is summoned.>
Selene: "Maarselok! You'll pay for defiling this place!"
Selene: "Unbind me, warlock!"
Maarselok: "And you've brought an audience! How fun!"
Selene: "Kill this abomination and I'll choke Maarselok on his own corruption!"

In this fight you will need to bring down this powerful Azureblight Lurcher while Maarselok flies overhead. Maarselok's Azureblight Strafe will empower the lurcher if it is hit by his breath or the lingering blight. Additionally the lurcher will be "resurrected" a few times as Selene retaliates with her own powers. Eventually, Maarselok will get bored and fly off, inviting you to follow him. The chase starts again and you will need to continue moving forward.

A new form of elite enemy will be encountered; they are surviving Bosmer from the initial attack force which have been corrupted by the Azure Blight. Each type has their own special abilities and shielded health, if you manage to remove the shield the Blight will disappear and the Bosmer will thank you for saving them before leaving for safety. Eventually you will reach a chamber which is filled by a large growth, dripping with Azure Blight. This is the Azureblight Cancroid and the source of corruption in the caverns:

Selene: "There. That writhing mass is the source of the cancer in this cavern. It must be purged."
Warlock Carindon: "Leave it. Its proximity is already beginning to taint you."
Selene: "Destroying it weakens Maarselok's hold!"
Allanwen: "We're destroying it! Help Selene however you can!"

Continuing onward, you will eventually find yourself outside and on the other side of the mountain. There, Maarselok will be waiting for Selene and tries to convince her to join him.

Maarselok: "There you are, my pet. I feared you lost interest."
Selene: "I am no one's pet!"
Maarselok: "No, you're the Elf's plaything. But you could be so much more."
Selene: "You'll pay dearly for all of this, Dragon!"
Allanwen: "Go. Protect Selene! We'll give her everything we have!"
Maarselok: "We don't have to be enemies, Selene. I am in need of a priestess."

In this second encounter with Maarselok, he will start the fight perched up on the ruined walls. As for Selene, she will take to the battlefield and start summoning Shagrath's Host to attack Maarselok to bring him down to the ground so he can be attacked directly. Your goal in this fight is to protect Selene so she can do this and to bring Maarselok's health down to a certain point. Maarselok will try and prevent this by summoning Azureblight Stranglers that poison Selene's spiders and other creatures to distract her. These need to be targeted and destroyed. While Maarselok is on his perch, he will occasionally target group members with Unrelenting Force. Eventually, Maarselok will flee to the summit and Selene is out for blood.

In this final chase after the dragon, this is where the final dungeon mechanic is introduced—Azure Blight Infection. As you fight your way through the stairway gauntlet to the summit, periodically the Blight will try and claim one of the party members as host. This is heralded by a wave of dark blue light and a written warning appearing on the screen: The Azure Blight is claiming a Host!. Luckily for you, Selene is there to help. Along the path, Selene will appear and summon a glyph on the ground after the initial warning, after a few moments another message will appear: Selene exposed the blighted host! One of your group will be covered in dark blue stuff and the infected person will need to run up to the glyph and cleanse themselves with a synergy.

On the platform at the summit, Maarselok will be waiting for you and immediately tries to take control of Selene.

The Changeling will summon four glyphs on each side of the platform as the fight begins. During this fight, Maarselok will infect a group member with an audio and visual cue. Like seen previously, the infected person will need to cleanse themselves with a glyph before it can take root. The dragon's big attack is his Charge which is announced on screen with Maarselok is preparing to Charge!. He will then swiftly charge across the platform. Once the dragon is slain, there will be celebration and Selene wants the terms of her deal upheld.

Allanwen: "Z'en above! We did it!"
Gadnalon: "And we're all alive! Somehow. You all really pulled through for us. Even you, Carindon."
Warlock Carindon: "Did I not agree to lend you Selene's aid? I expect payment from your king, promptly."
Selene: "You don't speak for me, oathbreaker. Your promises aren't worth the air you waste speaking them."
Allanwen: "Hey! Hey! Let's not sour our victory!"

Speak with Allanwen to complete the quest.

"I confess, I didn't think our luck would hold there in the end, but Z'en was watching over us today. You too. I don't believe this plan could have been successful without you."
Thank you.
"Here. This was a gift from King Camoran. It's yours now. Payment in kind. With some gratitude on the house."

You will receive some gold, a skill point and Unidentified Lair of Maarselok Armaments containing a piece of gear. 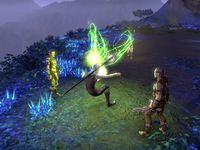 Warlock Carindon after trying to break the agreement

Afterwards, Carindon will try to get out of the deal to free Selene. Allanwen and Gadnalon will intervene:

Selene: "You've got what you wanted. Honor the pact and release me."
Warlock Carindon: "The Wood Elves made that foolish bargain. I never agreed to it."
<He restrains Selene with his magic.>
Selene: "Liar! I'll kill you!"
Warlock Carindon: "Again you prove yourself too dangerous to let roam. Perhaps when you're tamed."
<Selene fires back with her own magic and knocks Carindon on his back.>
Allanwen: "Carindon! No! I won't let you break our agreement!"
Gadnalon: "Let her go, you cad!"
Gadnalon: "Run, Selene!"
<Selene disappears.>
Warlock Carindon: "Weak-willed fools! She's made you her puppets! Let me go!"
Allanwen: "You aren't going anywhere, Carindon. The Arch-Mage wants a word with you."