"I found an illustration for this garb in a founder's journal and made it for our second Proving Festival. I'm pleased with the result!" —Magnate Feina-Darak 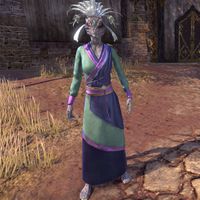 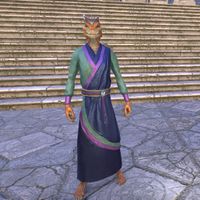 during the month of June in 2019. It came bundled with the Hakoshae Festival Laurel adornment.

(The gold trim and blue gem cannot be dyed)

The elite Ordinators who guard Mother Morrowind are the Hands of Almalexia, who wear distinctive armor of white and blue.

; also available as a Superior-level reward in Dwarven Crown Crates.

"After the last time someone tried to hug me at a Dark Anchor, I designed this attire. It's particularly effective at staving off such shows of … excessive and nonconsensual exuberance."—Pelynwe the Untouchable 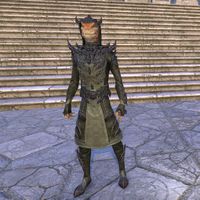 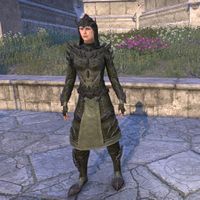 from June 4 to June 8, 2020. It reappeared as a Legendary-level reward in the Akaviri Potentate Crown Crates.

Dyeing
Slot 1: Most of hood, skirt, torso, leggings, boots, gloves
Slot 2: Skirt trim, details on skirt, lower torso and lower back of hood
Slot 3: Front and back of center torso, details on gloves and boots

Bretons like to display their wealth through their apparel, as shown by the rich fabric and glistening ornamentation of this outfit designed by Lady Eloisse of House Manteau. 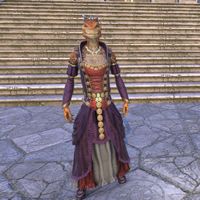 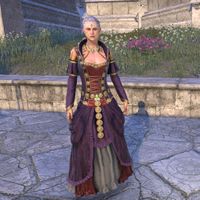 A Breton-style dress that was previously sold in the Crown Store for 010001,000

(Coins and necklace cannot be dyed)

"Even a rugged pioneer of the borderlands can show some distinctive Breton style," says Lady Eloisse of House Manteau. "Our traditional linen shirt is suitable for any occasion!" 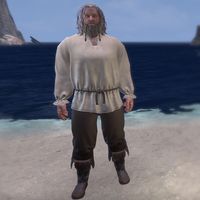 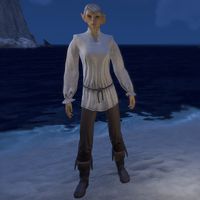 A Breton-style outfit, previously sold in the Crown Store for 00500500

"With the growth of Balmora, sport hunting in Morrowind has a new capital," says designer Arvel. "Whether you're pursuing nix-oxen or hunting hive golems, dress for the chase in these luscious leathers!" 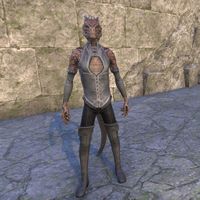 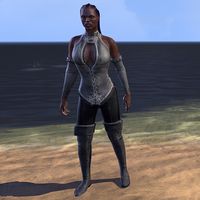