Show off your love of baking by donning this practical yet stylish baker's outfit. 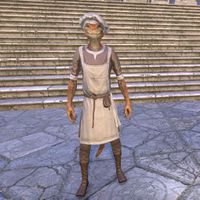 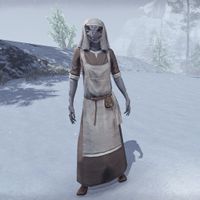 Forms part of The Intrepid Gourmet Bundle, along with emotes, furnishing items, and a recipe book, that was available in the Crown Store from July 24 to July 3, 2019.

This savage tribal outfit enables the wearer to express his or her inner barbarian.

"Whether you're belting out 'Ragnar the Red' in the tavern, or just down there for the Loredas evening dance, all eyes will be on you in this free-swinging layered dress!" --Jork the Tailor-Thane 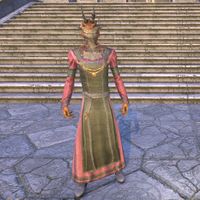 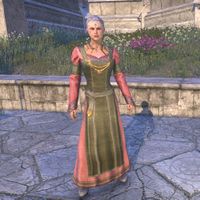 Received as a daily reward in February 2019.

(The seams on the dress and apron as well as the gilded jewelry/belt buckle are not dyeable.)

This costume replicates the magnificent gilt armor of the Battlemage Palatine, commander of the Cohort of Imperial Battlemages. 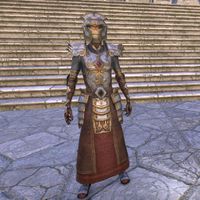 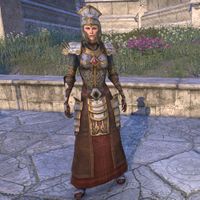 This costume replicates the pragmatic and functional working armor of a Battlemage Scout Captain, as worn when leading a troop of mounted scouts. 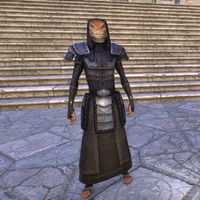 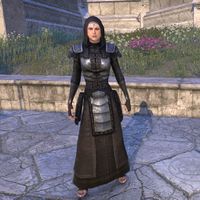 Dyeing
Slot 1: Iron plates and chain-mail
Slot 2: Most of the bottom of the robe
Slot 3: Black leather on all parts of the costume

This costume replicates the armor of a veteran Battemage Tribune, usually the highest ranking Imperial Battlemage to actually take the field and personally engage the enemy. 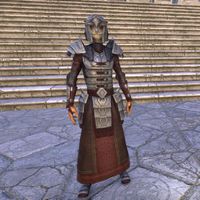 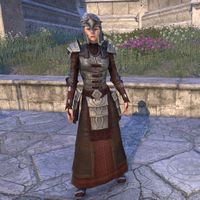 Dyeing
Slot 1: Silver parts of the armor
Slot 2: Buckles and trim on the chest piece, parts of the lower robe on the outer thigh
Slot 3: Most of the costume's leather parts

(The chain-mail near the pauldrons is not dyeable)

Only those who have been inducted into the deepest secrets of the mysterious Dark Brotherhood are authorized to wear the Black Hand Robe. 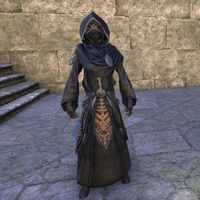 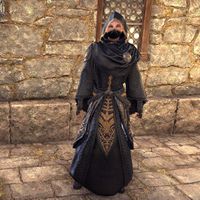 The Black Hand Robe is acquired by completing the quest Filling the Void.

(Shoes, belt, gloves, and straps are not dyeable)

This light outfit of tooled leather resembles those worn by the Keepers in Black Marsh, who assist at the Argonian Hatching Pools. 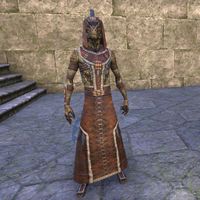 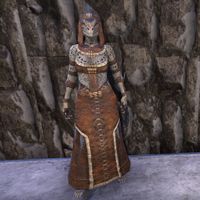 An Argonian costume worn by the Keepers of the Shell at Shadowfen's Hatching Pools. Part of the Tribal Shamans Pack, which was sold in the Crown Store for 00700700

This heavy leather smith's apron and gauntlets denotes a master of the forge. 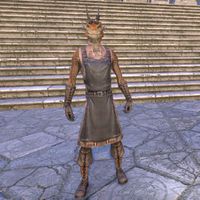 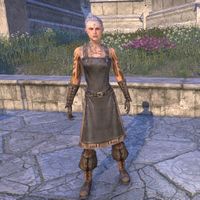 A blacksmith costume, originally sold in the Crown Store for 00400400

Dyeing
Slot 1: Smock beneath the apron, leggings and ankle-portion of the boots
Slot 2: Belt, gloves, shoulder straps, boot cuffs and toes
Slot 3: Apron and small section behind the knee

"We Nords are a people unafraid of getting our hands dirty," says Jork the Tailor-Thane. "We like our clothes to be practical, yet stylish at the same time. My Bleakrock Housecarl Dress is a prime example!"

Available as an Epic-level reward in Frost Atronach Crates. 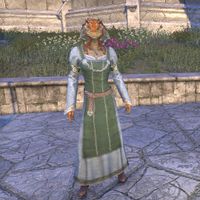 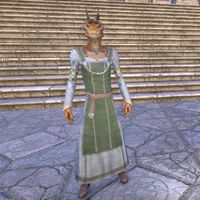 The metal bits cannot be dyed.

For the Argonian tribes that follow the custom, the Bonding Rite is a significant ceremony that requires appropriately gaudy attire to mark its importance. Suitable for weddings and all celebrations of affection and friendship- even if that's just knocking back some theilul at the local inn!

from January 24 to January 28, 2019. It is now available as an Epic-level reward in Frost Atronach Crates. 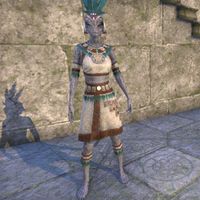 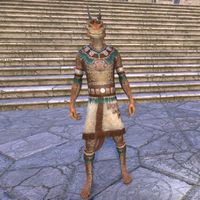 The feathers, chest medallion, jewelry, neckpiece, and the square embroidery on the skirt are not dyeable.

This costume pays tribute to a legendary Breton hero of the Daggerfall Covenant. Now you can honor this nameless rogue by adopting his intimidating outfit. 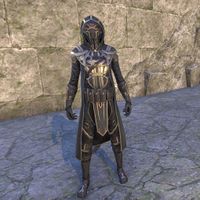 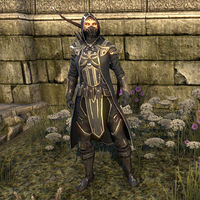 to ESO Plus Members. It is also available as a Legendary-level reward in Dwarven Crown Crates.

For the Orc who aspires to impress, this season Borzighu of Coldsnap Clothiers offers rich fabrics in subtle shades, accented with gold and steel to convey an indelible image of wealth and power. 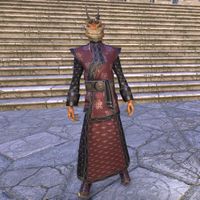 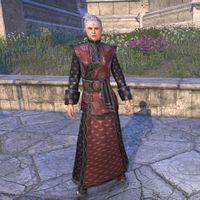 The "Brilliance" Brocade Robes costume was sold in the Crown Store for 010001,000

Dyeing
Slot 1: Main body of the garment; the red cloth on the robe if an un-dyed version.
Slot 2: Sleeves, belt and black outlines
Slot 3: Pins and gold adornments on the robe; belt center and the stripe running through the middle of the belt

The geometric patterns on this costume are not dyeable.

Samsu the Sleek says, "This season in Mistral we're tightening up the traditional billowing budi to give it a more streamlined silhouette, and shortening it the better to show off our breeze-catching galligaskin trousers. So comfy!" 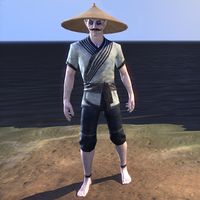 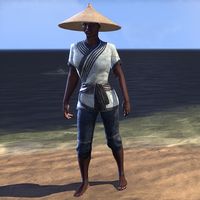 (Sash is not dyeable)

"I've woven some of Lord Vivec's austere elegance into this outfit, my tribute to the Tribune," says Voldsea Arvel. "Soiree tonight in St. Delyn Plaza? In your new 'Buoyant Gentility' garb, you'll be a Vvardenfell vision!" 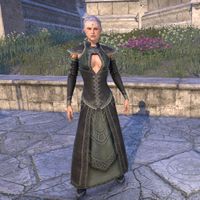 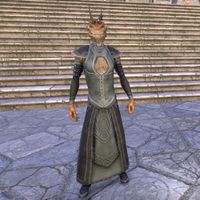