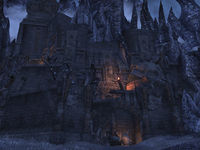 The Vile Laboratory circa 2E 582

The Vile Laboratory is a location in the Black Garrison region of Coldharbour, used by Molag Bal for his many horrific experiments. The building itself is an emulation of a Dwarven ruin, although the complex is crawling with undead and Daedric guardians. It appears to be run by a Xivilai named Overseer Xvarik.[1]

The laboratory has seemingly been in existence since the Merethic Era, as it is where the skeleton of the dragon Boziikkodstrun was brought after his flesh was consumed by Bal. Here the skeleton was infused with "blood-of-darkness", which re-awakened it as a Vestige. The skeleton was also modified according to Bal's own design, before being plunged into the Azure Chasm to create the first Daedric Titan.[2] Indeed, experiments concerning vestiges and souls appear to be the norm in the Vile Laboratory. The Xivkyn are the result of experiments with vestigial hybridization in the laboratory between Dremora and Xivilai.[3]

At some point, a Light of Meridia was taken to the laboratory for safekeeping, in an attempt to keep the artifact out of Meridia's clutches. In 2E 582, two Mages Guild members were imprisoned within the Vile Laboratory after being separated from the rest of the Tamrielic invasion force. The mages, a Dunmer named Gadris and a Khajiit named Zur, underwent an experimental soul-meld process, and were subsequently cast out of the laboratory to die. Confined to a single body and desperate to separate their souls, the weakened pair began work on a transmutation potion to sneak back into the ruins. With help from the Soulless One, the "Soul-Meld Mage" managed to overpower Xvarik and reach the catalyst needed for the separation procedure, although only one of the mages survived.[4] The Soulless One also recovered the Light of Meridia from the ruins.[1]