Of all the beasts of Oblivion, the Ruinach is the one most like the Prince of Destruction in form and in fury. Created by a fiery malevolence in his terrible image, the Ruinach is a terror to all those who look upon this multi-limbed, muscle-bound monstrosity.

"Ruinachs are four-armed monstrosities that serve as Dagon's elite marauders," explains Leamon Tuttle, ESO's Loremaster. "They don't possess that ruthless cunning and strategic brilliance of the Dremora, but they make up for it in brute strength and unflinching loyalty to Dagon personally." 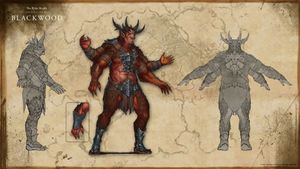 For many, including Dagon's other Daedric followers, the details of the Ruinach's creation and ancestry remains a mystery to all but the monsters themselves.

"No one knows Ruinachs' true origins, but we do know they're a relatively recent addition to Mehrunes Dagon's army of immortal monsters," says Tuttle. "Some mages and historians believe they grew from Dagon's actual flesh—an unforeseen result of Almalexia's vicious attack during the Battle of Mournhold. The Kyn think that’s total bunk, but the Ruinachs seem to accept it as gospel truth, and every Ruinach claims direct Dagonic ancestry. Their fanaticism runs so deep that they sometimes refer to themselves as the 'fifth hand' and believe they are a direct manifestation of Dagon's will."

Whatever their origins and ultimate purpose, they are a force to be reckoned with, and one you must find a way to overcome as you delve deeper into the Gates of Oblivion adventure.

When designing the Ruinach's combat abilities, the team wanted a monster that relentlessly kept its opponents on its toes.

"The Ruinach was imagined as an elite Daedra in Mehrunes Dagon's own image, so it was important that it feel brutishly strong," explains Anthony Oliver, ESO's Senior Content Designer. "Players will find the Ruinach routinely chooses between powerful melee attacks and more tactical magic abilities."

Be warned, these Daedra are more than just hulking brutes, and when in combat, in addition to their impressive natural strength, they can harness all the powers of the Deadlands against their foes.

"The Ruinach can channel destructive magic through its weapons–transforming them into fiery projectiles or conjuring spinning columns of flame," says Oliver. "Be prepared to keep moving to avoid getting burned."

Thankfully for the people of Tamriel, the Ruinach is not often found outside of Mehrunes Dagon's realm, although there are rumors that one currently stalks the wilds of Blackwood.

When designing this creature, the team wanted to create a new Daedric monster that truly reflected its master and unique plane of Oblivion.

"With the Ruinach, we wanted to give the players something that could be believable as a Daedric creature but also steered away from the reptilian aesthetics of the daedroth or clannfear," explains CJ Grebb, ESO's Art Director. "Instead, we looked toward the Daedra that are often associated with Mehrunes Dagon, such as the scamps and even the Herne. We wanted a hulkish creature whose association to Mehrunes would be clear, but also one whose silhouette would more immediately evoke an animalistic and less intellectual personality."

While a dangerous prospect for Tamriel’s adventures, the team discovered that building this four-armed beast had its own challenges for the development team, too. Especially so when it came to animating its additional limbs.

"The Ruinach was probably one of the more fun problems that I've faced in my career," says Young Vo, ESO's Lead Animator. "I had to figure out how to make the nonactive arms feel alive and engaged while the other are active. If nonactive arms were moving too much, it was distracting, but if they were not moving enough, then they would feel lifeless and not part of the character. It was a tough balancing act, as the player would notice if we went too far in either direction." 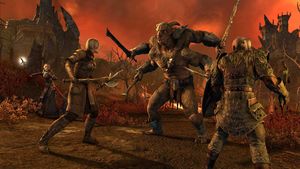 While ESO does feature other multi-limbed monsters, Young looked to other games and media for reference and inspiration when developing the Ruinach’s complex animations.

"When researching, I found myself looking at a four-armed character from a fantasy movie,” explains Vo. "I don't remember the character's name, but the way he used his arms to fight was convincing and fluid. I acted some of his moves out to get a feel for how they worked and did some thumbnails of how our four-armed beast would fight. After that, I got my phone out to capture reference of me being our monster. When I captured enough reference, I used it to help inform my animation."

The result is a new Daedric monster that will be a handful for both new and veteran players alike—good luck!

Are you ready to confront some of Mehrunes Dagon's most dangerous and loyal minions? Take heed, while you must face the Lord of Destruction's most brutish warriors in the upcoming Blackwood Chapter, you will encounter these beasts throughout all your Gates of Oblivion adventures. Be sure to let us know your thoughts on these multi-limbed monstrosities on Twitter, Instagram, or Facebook!

The Elder Scrolls Online: Blackwood arrives on PC/Mac and Stadia* on June 1, and on Xbox One, Xbox Series X|S, PlayStation 4, and PlayStation 5 on June 8. Pre-purchase Blackwood now to receive unique bonus rewards and gain immediate access to the Nagahide Welwa Ravager mount. Don't miss out!

*Available only in limited territories.