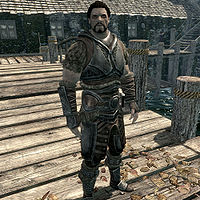 Maul is a Nord thief and the right hand man of Maven Black-Briar, the leader of the Black-Briar family. Should Maven be named Jarl of the Rift when the Imperial Legion claim the hold, Maul becomes Maven's housecarl. He is a former member of the Thieves Guild and is the brother of Dirge. Maul will readily point you towards Brynjolf in the marketplace, or Aventus Aretino in Windhelm. He will also provide some useful guidance if you show him an unusual gem.

When you first enter Riften, Maul will be stationed outside Aerin's house, keeping an eye on all new arrivals. When you try to pass, he will actively seek you out and ensure you do not intend to cause trouble for the Black-Briar family. When the conversation is over, Maul will exit Riften through the western gate and find his spot near Riften Warehouse where he will keep an eye on the Black-Briar Meadery around the clock (see bugs). If Maven Black-Briar is appointed Jarl, Maul will move into Mistveil Keep where he will sleep in the southeastern chamber between midnight at 8am. He then enters the throne room for a two-hour breakfast with Maven and Hemming Black-Briar. The rest of the day is spent leaning against a pillar in the throne room, only interrupted by two-hour meals at 1pm and 7pm.

Maul wears a full set of steel armor, including a pair of steel gauntlets (steel Nordic or steel Imperial versions) and a pair of steel boots (steel cuffed or steel shin versions). He is equipped with a leveled dagger which can be up to elven quality at level 20, and carries a key to Black-Briar Manor, a belted tunic, as well as a selection of common loot and gold.

The first time you visit Riften, Maul will actively seek you out and say: "I don't know you. You in Riften lookin' for trouble?" If you just exit conversation he will get angry: "You can pretend not to hear me all you want... but you better stay out of the Black-Briars' business." If you continue, three options will be available to you, each followed by a warning from Maul.

He will then elaborate on the Black-Briars and himself: "The Black-Briars have Riften in their pocket and the Thieves Guild watchin' their back, so keep your nose out of their business. Me? I'm Maul. I watch the streets for 'em. If you need dirt on anythin', I'm your guy... but it'll cost you." If you try and exit conversation, Maul will get angry, saying: "Hey, you. Get over here, I want to talk to you.", or "Yeah, walk away like a good doggie. Just stay out of the Black-Briars' business and maybe we'll give you a bone." and will not talk to you anymore, simply dismissing you with: "I'm through with you. Get out of my way.", "You aren't worth my time. Piss off." or "Stay out of the Black-Briars' business and you'll live longer." You must pass an easy Speech check to persuade him to stay in conversation with you.

You can then choose from a few topics and he will have some useful information for you. If you ask him what an unusual gem is worth, he'll respond: "Do I look like a merchant to you? You're going to have to take that up with Vex in the Thieves Guild. Get in good with them and you'll find her." If you ask him to tell you more about the Black-Briars, he'll explain: "Well, you got Maven, she pretty much runs the whole operation. She's got friends in high places if you know what I mean. She's also got ties to the Dark Brotherhood and the Thieves Guild, so basically no one can touch her. Just remember, if she tells you to do somethin'... you damn well better do exactly what she says." If you ask if he knows anything about the Thieves Guild, he'll reply: "You kiddin'? My brother Dirge works in their hideout. I used to run with them myself, but took a job with Maven after they started hittin' a rough patch. If you want to get in on that action, find Brynjolf in the marketplace. I'm sure he could use someone like you." If you ask him for news involving the Dark Brotherhood, he'll tell you: "The only thing I heard is a rumor that a boy named Aventus Aretino, in Windhelm, has been attempting to contact the Dark Brotherhood. He used to live here in Riften at the Orphanage on the other side of town but I think he ran away. Can't say I blame him." When you exit conversation, Maul will be on his way with: "Be seein' you around."

Maul will then take his spot at the Riften dockside and will prove a lot less talkative than promised, although his greetings will differ depending on your progress within the Thieves Guild quest line:

"What did you want?" (If successfully passed the persuasion)
"Get in good with Brynjolf, then we'll talk." (during A Chance Arrangement)
"You want to talk? Finish those jobs for Brynjolf first." (During Taking Care of Business)
"Dirge told me you made it into the Guild. You need dirt on anything, you talk to me." (After starting Loud and Clear)
"What did you want to know?" / "Back again? What is it this time?" (If you are a member of the Thieves Guild)

When he moves into Mistveil Keep, Maul will be a bit more talkative and you can ask him what he thinks of the civil war: "Hey, if the Empire and the Stormcloaks want to kill each other over some foolish cause, I say let 'em. All I care about is two things: watchin' Maven's back and countin' the gold she pays me to do it." He will also share his interpretation on his new job as housecarl: "As long as she continues to keep me at her side, she can count on my blade to protect her. To be honest, I doubt someone would be stupid enough to make an attempt on Maven... sorry, Jarl Maven's life. But just in case, I'll be ready for them."

In Mistveil Keep, Maul will still take care of Maven's business, both official and unofficial: 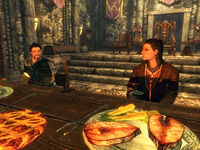 "I've spoken to Brynjolf and he assures me it'll be taken care of."

Maven: "Any word about our little problem in the Ratway?"
Maul: "I've spoken to Brynjolf and he assures me it'll be taken care of."
Maven: "Next time you speak to him, tell him to clean up his own messes. I'm not about to jeopardize this position for a bunch of low-life thugs."
Maul: "I'll let him know."

Maul: "My agents are telling me that we've appropriated the caravan from Hammerfell... with minimal losses."
Maven: "For what it's costing me, I should be handed the merchandise on a silver platter."
Maul: "The coin isn't just for the men, there's a lot of people that need to be compensated in order to make this happen."
Maven: "And a hefty cut for yourself too I'm sure. Just see to it the items are secured and the rest disposed of properly this time."

Maul will occasionally talk to Hemming about the questionable promotion of Maven: 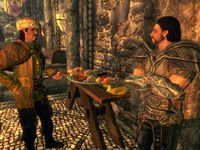 "Your mother seems to have taken to her seat quite well."

Maul: "Your mother seems to have taken to her seat quite well."
Hemming: "Yes, she's been grooming herself for this for quite a long time."
Maul: "It's surprising the Council is allowing a Nord rule Riften under the Imperial flag. That can't be their first choice."
Hemming: "Let's just say my mother knows which pockets to line and keep it at that."

Court wizard Wylandriah will often face problems with Hemming Black-Briar's abusive behavior and will try and enlist Maul to help her out:

Wylandriah: "Maul, can I ask a personal favor of you?"
Maul: "Well that depends on what the favor is, now doesn't it."
Wylandriah: "It's Hemming. He's making advances and I can't bear the man's presence. Is there anything you can do?"
Maul: "I'll talk to him, but he's stubborn. He's like his mother; he sees what he wants and he won't quit until he has it."
Wylandriah: "Anything you can do to keep his filthy hands off of me would be a welcome change."