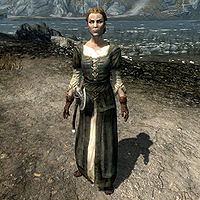 Grosta is a Nord lumberjack that owns and operates Heartwood Mill. She lives there with her husband Leifnarr and son Gralnach. She is generally warm towards you, but ultimately comes off as hardened by the disappearance of her husband. She expresses little discernible emotion as she matter-of-factly states that the mill will go under in a few seasons without him.

Grosta will buy any firewood you bring to her, and will also sell lumberHF if Hearthfire is installed. If her disposition is raised high enough, she will also allow you to cut your own lumber for free.

Grosta wears a set of farm clothes along with a pair of gloves and a pair of boots. She carries a belted tunic along with a selection of common loot and gold. In combat, she relies on a leveled war axe which can be up to elven in quality.

When first met, she'll give a bitter set of greetings about Leifnarr and men in general: "Hmph. If you see my good-for-nothing husband Leifnarr on your journeys tell him he's no longer welcome here.", "Men are utter pigs... they only care about one thing.", "You men are utter pigs... you only care about one thing.", "Men are complete pigs, am I right? All they care about is one thing... and you know exactly what I mean.", and "If I ever catch my husband in bed with another woman, he's going to find himself homeless." When asked if running a mill is difficult, she'll say: "With just myself and one child, it's damn near impossible. With Leifnarr gone, it's really put me in a terrible bind. I'm having trouble making ends meet. At this rate, we won't last more than a few more seasons at best. Then I'll just have to sell the old place." When exiting conversation, she'll keep her bitter tone: "Quit taking advantage of us and this world might be a better place, you got that?" or "Don't let the men take advantage of you, always be on your guard."

If you ask her what happened to her husband, she'll begin to rant: "He said he was going east towards the border of Morrowind to trade some of our grain to some folks at Broken Helm Hollow. I waited and waited, and he never came back. Probably shacked up with some elven whore. Good riddance to him I say. If I only knew where he was, I'd sure give him a piece of my mind." If you tell her you don't like getting involved in family affairs, she'll react indifferently: "Doesn't matter. I'm sure he's long gone by now anyway." If you offer to try and find him, she'll say: "Good. If you see him, tell him Grosta said he can go straight to Oblivion... he's not welcome here any more." If you ask why Leifnarr was at Broken Helm Hollow, she'll say: "Well, he said that a few men have been going by to some of the local farms promising a good price from all the local mills and farms. Leifnarr said they'd pay double what you can usually get at the markets. The catch was, he had to head out there with our wood. So not only is Leifnarr gone, but a good bit of our supplies as well." When exiting conversation, she'll tell you: "Remember to tell that bastard I never want to see his ugly face again!"

When you return, she'll ask: "So, any luck finding my louse of a husband?" When you tell her her husband's fate, she'll be devastated: "No, it can't be... oh my... and all this time, I was thinking he'd been unfaithful to me. I feel so stupid. I've been a fool, wasting my time sitting here helpless when I could have sent help sooner. Perhaps this is all my doing... What's done is done. Here, I want you to have this. Bringing me closure was kind of you." When greeted, she'll now say: "Despite what you discovered it's still comforting to know my husband is at peace."

Grosta can be seen talking to her son about work around the mill or his late father: 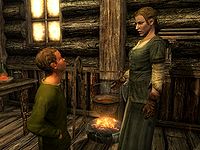 "Gralnach! I told you not to go through your father's things!"

Gralnach: "Mother, I finished cutting at the northern stand. Where do I move on to now?"
Grosta: "There is a copse of elms to the east. We could really use that wood."
Gralnach: "I was hoping to head into Riften for supplies, but I can do that after I'm done with the elms."
Grosta: "Just be careful, Gralnach. That copse doesn't look safe. If you see any trouble, you run right home."

Grosta: "Gralnach! I told you not to go through your father's things!"
Gralnach: "I'm sorry mother, I just want to know more about him. You never tell me anything!"
Grosta: "That's because there's nothing to tell. He left us to fend for ourselves and that's all you need to know."
Gralnach: "I wish you didn't hate him so much... I wish the whole family could be together again."

After the quest is completed, the conversation will take a slightly different tone:

Grosta: "Gralnach! I told you not to go through your father's things!"
Gralnach: "I'm sorry mother, now that he's dead, I just want to know everything I can about him."
Grosta: "He was a wonderful man, and he loved us very much. I'm sorry I yelled at you."
Gralnach: "It's okay, mother. I understand."