Heartwood Mill, a remote lumber mill located where Lake Honrich turns into Treva River, seems less busy than other mills with only Grosta working the mill and her son Gralnach fooling around on and off the road. If you talk to Gralnach, he will explain his father disappeared without a trace and left him and his mother alone with a mill to run. Talking to Grosta will reveal her suspicion that Leifnarr ran off with another woman and that she can't run the mill by herself. She then explains how Leifnarr left to trade wood and grain with some merchants near the Morrowind border, specifically a place called Broken Helm Hollow, and will mark the place on your map. 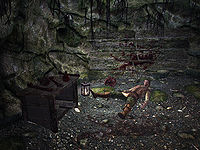 When you arrive at Broken Helm Hollow, it quickly becomes evident that Leifnarr was set up, as two leveled bandits will guard the cave entrance. Dispose of them both and head inside then proceed down the narrow tunnel and into the main area of the dungeon. There, you will encounter two more leveled bandits around the fire, as well as the bandit chief who resides up the southeastern slope. The boss chest is unlocked, but beware the corresponding swinging mace trap. Locate and read the Two-handed skill book Battle Of Sancre Tor, then find the pull chain straight south from the first set of bedrolls. Pull the chain and watch the rock wall disappear. Inside lies the dead body of Grosta's husband with an arrow through his chest. The room also consists of several severed limbs and blood spatters, along with a random spell tome and a weapons rack with lower level equipment. Activate the body to get the quest update, then leave the cave.

Once you travel back to Heartwood Mill, you will have no choice but to tell Grosta she is now a widow, which will make her regret her suspicions about Leifnarr being unfaithful to her.

For bringing her closure at last, Grosta will reward you with a leveled enchanted weapon, and her thanks. As a result of her friendship, you are now allowed to take the limited supplies from her house without penalty. You may also cut lumber freely at her mill for your player-built house, if you have Hearthfire installed.