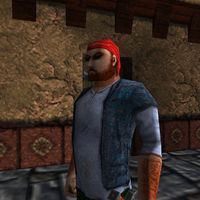 Rollo in front of his house

Rollo is a Redguard dock worker who works for Gerrick, bringing up shipments from the harbor. He is usually found in his house, but walks over to the docks when the bell in the Bell Tower starts ringing. While indoors he sits on a chest and will talk to you, but outside he tells you to go away.

Lakene only gives you the Smuggler's Den password if you retrieve his wife's silver locket. He claims Rollo cheated at cards to win the locket. Demanding that Rollo hand it over does not work; it's inside the chest he sits on, so you must make him leave. The bell rings occasionally, prompting Rollo to head over to the docks. If the bell hasn't rung, you can trick Favis into ringing it by waving Prnell's flag on the Harbor Tower's upper platform.

Rollo will initially be neutral toward you and all of his dialogue topics will be available. Greeting him a second time inside will make him annoyed. If you choose the more aggressive response to any of his dialogue (such as "Watch Your Tongue") he will become annoyed, or if already annoyed he will hate you. Notably, "Password or Else" will make him hate you immediately. When he hates you, he will default to a hate response if you ask him any topic.

If you climb on anything in his house:

"One moment."
"Quit bothering me."

"Touch me, and I'll pop yer stinking head off."
"Scram, ya little mucker."
"Stop ya squeaking, or I'll belt ya."

"I need to ask you a few questions."
"What makes you think I want to answer 'em?"

(Used in response to any topic if he hates you)

"Do you know a woman named Iszara?"
"Iszara ... Scrawny little thing, chicken legs, no hips? Yeah, I know her. Used to come by, pestering me all the time,
"You know how women are. Not my type though. Rollo likes 'em larger."

"Watch your tongue, cretin. That's my sister you're talking about."
"Oh, big brother's a tough guy, eh? Topping it pretty high, aren'tcha, coming in to my house talking that way. I haven't seen her in months anyway."

"What do you know of the Restless League?"
"Bunch of idiots, if you ask me. You can't fight the Empire. They'll learn though."

"How are things in town with the Imperials in charge?"
"What do I look like, the town crier? Same old same old, as far as Rollo's concerned. Politics is for suckers.
"I got a sweet deal with Gerrick, no need for me to worry about who's sitting in the Palace."

(Unlocked by hearing about it from Gerrick, Mariah, Prnell, or Siona; disappears when you learn the password)

"Do you know anything about the Smuggler's Den under the Cartographer's shop?"
"Maybe I've heard of it. Yeah, I've seen some guys hanging around there, supposedly in the Restless League, but it's all talk.
"They never do anything. You can't get in there without a password, anyway, so you might as well forget about it."

"I know you've been in the Smuggler's Den, Rollo. Tell me the password and I'll leave you alone."
"You got the wrong guy, I don't know nothing about no password. I was just telling you what I'd heard."

"You're a bad liar. Tell me the password or else."
"Or else what? You'll kill me? I ain't armed, and I know you old-time Redguard types don't go in for that. You don't scare me."

(Disappears if you have talked to Dreekius or Tobias)

"I'm looking for the Draggin Tale Inn. Do you know it?"
"It's right outside, you big oaf! Here are some directions maybe you can understand.
"Go outside. Look around. If you don't see it, open your eyes and try again. Now get lost!"

(Unlocked by Lakene: "Give Me Password" if you don't have the silver locket; disappears when you learn the password)

"Lakene tells me you have his wife's silver locket. Any chance I could get it back?"
"Stupid Lakene! He's a loser at more than cards. Deserves what the missus will give him when she finds out. It's mine now and I ain't giving it back."

Give It to Me

"I need that locket. Hand it over."
"I got your silver locket right here, pal. Take a hike, I'm busy."

"Suit yourself. It's of no importance to me."
"Then why are you bothering me about it? Moron."

"What sort of deal do you have with Gerrick?"
"You know, that fool elf that runs the trading post. Pays me a silver penny for each crate I bring up from the docks, no lie!
"And I only have to go down when the bell rings, means a ship's arrived. Yep, Rollo knows a good thing when he sees it."

(Unlocked by "Stros M'Kai"; disappears after quest Escape the Catacombs)

"I don't suppose you've ever been in the Palace?"
"Naw. Could've got a job to go up there, but Kotaro wasn't offering enough. Let some other sucker trek all the way out to N'Gasta's."

"Bell?"
"Sheesh, you are as dumb as you look. The bell, in the Bell Tower, right outside."

"Rollo, I have half a mind to kick your teeth in."
"Half a mind sounds generous. Close the door on your way out."

"Of course. How stupid of me."

(Unlocked by "Palace" if you have not talked to Kotaro)

"Kotaro? Who's that?"
"The Laborer's Guild guy, down in the harbor, that's who. Hires deadbeats like yourself for peanuts. You should look him up, look like you could use a job."

"You talk too much, Rollo. One day, your big mouth is going to get you in trouble."
"Eee-yawhn. Wake me up when you're done yapping, ok?"

"You say Kotaro had a job for someone to go up to the Palace?"
"That's what he said. Something to do with that creepy old necromancer. Why don't you go ask him about it and quit bothering me?"

"Tell me about this N'Gasta."
"Didn't I tell you to buzz off? He's some sort of necromancer, lives outside of town in a big tower."

"Necromancer?"
"Yeah, N'Gasta. Don't tell me you never even heard of him."

"It's always a pleasure, Rollo"
"Don't let the door hit you on the way out."